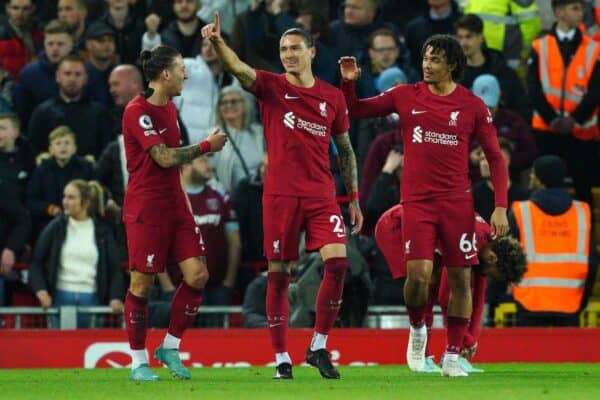 The Reds scraped a win thanks to a big performance between the sticks but also showed they could pose a considerable goal threat soon.

Some dicey moments early on, making some dangerous misplaced passes, but eventually settled.

And settled enough to save a Jarrod Bowen penalty, diving to his right in front of the Kop as they chanted his name.

Made an impressive flying save late on to deny Tomas Soucek after some poor defending from those in front of him.

Contributed greatly to the win, especially as the attackers couldn’t get a second goal.

Back in the team to replace Milner who had started against City and performed admirably.

Trent took the chance to assert himself again in the position. There were no real noticeable moments from him defensively, where he just did his job and did it well.

It was a similar story in attack where Tsimikas appeared to be the more adventurous of the two full-backs, but played a nice round-the-corner pass to send Salah through late on.

There was a difficult moment against Said Benrahma late on, but it was generally a game in which he was out of the spotlight, which will not do him any harm.

After a standout performance on Sunday, Gomez didn’t have the best game, though he did improve slightly during the second half which is encouraging for upcoming games.

Made a needless challenge jumping into Jarrod Bowen to give away a penalty. Should have waited for the attacker to make his move rather than attempting such a needlessly awkward challenge in the box. Outside the penalty area it might have been more understandable to engage in such a way.

Made a poor defensive header shortly after led to a chance for Flynn Downes, and gave the ball away needlessly at the start of the second half.

Though his errors didn’t harm Liverpool in the end, he will be looking to get back the good form he showed earlier in the season, and again against Man City, in the next game against Forest.

Appears to be back to his best.

Winning duels of all kinds against the varied West Ham attack, from target-man Gianluca Scamacca to the trickier Bowen.

Bailed Gomez out a couple of times, and led the back line well.

Involved in his own battle with the lively Bowen and held his own throughout defensively.

Played a brilliant cross for Nunez to open the scoring, pretty much impossible for West Ham to defend.

Heavily involved early. Carrying the ball forward into the space ahead of him. Ended the game with more touches than any other player.

Had an enjoyable few minutes towards the end of the first half, launching a pass out to Gomez, before flicking another round the back to Thiago when it came back to him shortly after.

Was also a threat running in behind the defence, and threatened to chip Fabianski but his shot went just over.

Played a great long pass through to Nunez which almost opened the scoring.

It’s good to have him starting regularly, as this allows him to get into a rhythm on a run of games, and be the controlling midfielder Liverpool need.

Finished the game with a pass success of 92%, indicating how he and Henderson were able to keep things ticking over in midfield.

Looked like a good replacement for Diogo Jota down the left wing in this 4-4-2 / 4-2-4. Isn’t quite the direct threat Jota can be at times, but offers something of his own in return.

Can be difficult for opponents to keep track of, and showed this occasionally in this game.

Showed signs there is plenty more to come if he gets a run of games with Jota out.

Was in and out of the game but is always a valuable link-up player and selfless runner.

Sent a left-footed effort wide in the first half and another was deflected wide in the second.

Took the initiative as the main centre forward with Nunez off, which let Salah make dangerous runs around him. Seems to fit this formation well in a couple of ways.

After West Ham fans had spent the opening 15 minutes singing about a ‘shit Andy Carroll,’ they had a great view of the opening goal as Nunez superbly headed in Kostas’ cross from the left. It was a good ball in to find the Uruguayan but the header wasn’t easy, and he executed it well.

Nunez had the beating of the West Ham defenders every time when played in behind. Almost made it count even before his goal with a well-taken first-time hit with his left from a Thiago pass, producing a save from Fabianski.

Then had a superb half-volley from the edge of the box that smashed the post. Unlucky not to have netted more.

A vital first goal at home for Nunez at Liverpool. More to come.

He had a few more efforts off-target as he regularly cut in from the left to shoot.

Played a nice one-two with Firmino but sent his shot straight into the hands of Fabianski.

Got a rare foul awarded in his favour in the second half when Thilo Kehrer pulled him back. Shows great strength and hold-up play as a centre forward.

Almost got himself on the scoresheet late on but his slightly overhit first touch gave Fabianski a chance to intervene.

Worked hard in defence on the right wing, supporting Trent while also pressing high when needed.

Saw a shot deflect over the bar from a corner. Looks like he could be useful on the left of this formation.

Was turned a couple of times and didn’t really settle at all. Should have done better for the late chance Alisson saved. Disappointing cameo, below his standards.

James Milner (on for Firmino, 81′) – N/A Great block near the end to deny Soucek.

Andy Robertson (on for Tsimikas, 81′) – N/A Added some quality down the left to calm things on the ball.

The manager decided to return Salah to the right flank despite his impressive performance through the middle vs. City, going with a central pair of Firmino and Nunez.

The initial formation worked as Nunez was big threat, though it did seem to stifle Salah somewhat until he was able to move centrally after Nunez was subbed.

The team looked uncomfortable after switching back to 4-3-3 late on, and the midfield of Henderson, Fabinho, and Milner started to struggle.

There was plenty for Klopp and his players to learn from even in victory.