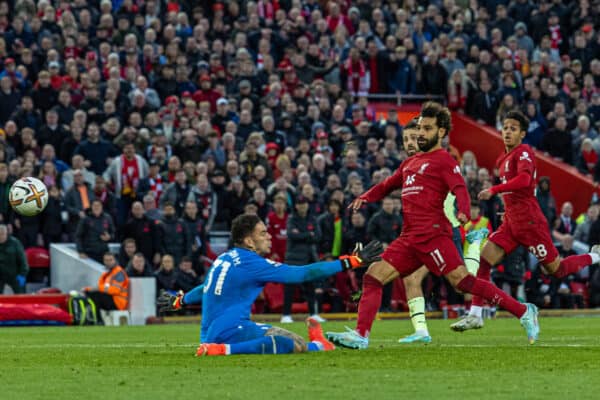 Liverpool fans embrace “one of most satisfying wins” from “battling” Reds

Liverpool sprung the most welcome of surprises thanks to a stunning Mohamed Salah goal, handing Man City their first league defeat of the season in a 1-0 win at Anfield.

With Man City in town, there was no question that the Reds had to raise their game from the levels they’ve shown so far, notably in the Premier League.

And they did just that, bringing the intensity and tempo required to unsettle Pep Guardiola’s side, with chances coming their way to make it count where it matters most.

A disallowed goal for City added fuel to the fire inside Anfield and Salah saw it erupt with a goal that was a near carbon copy of his strike against Man United in that season.

Alisson with the assist, the No. 11 with the turn and finish and Liverpool 1-0 up. Brilliance.

Jurgen Klopp didn’t get to see the final stages having been shown a red card for the incompetence of the referee, but those three points tasted sweet:

Mo Salah and Virgil van Dijk absolutely took that match personally. Outstanding. Liverpool… not quite past it then.. #LFCdigest

Feel like crying. What an emotionally exhausting and draining 2 hours. Love and miss the reds so much

I have no words. What an absurd match.

Joe Gomez outstanding and deservedly named Man Of the Match. James Milner immense. As battling a performance as you will see from this Reds. On back foot most of second half but a moment of brilliance from Mo Salah seals it!!!!!! What a win

This is Anfield. Pure raw, emotion, defiance and a wall of noise.

Brilliant from @MoSalah that. As soon as Alisson had the ball in his hands from De Bruyne's free-kick Salah was on his bike to be able to isolate Cancelo 1v1 and force the defender into a fatal mistake.

Alisson with an assist in three of his last four PL seasons and a goal in the other. An attacking menace.

I feared a mauling, I doubt I was alone in that, but always hoped for the best.

What a win. These reds! Have that Pep you bad weirdo! Sorry James Milner for doubting you. Love you #LIVMCI

Salah with a turn there that Liz Truss would be proud of!

An incredible win from a set of lads who’d forgotten just how much of an incredible team they are.

Outstanding performances from every one of them.

One of the most satisfying wins of the Klopp era that, amazing

Liverpool, you don’t half confuse me much. But this match was another reason why we can’t help but adore this sport.
Everyone (pretty much) in a red shirt left it all on the pitch.
Special word to those centre backs, especially Gomez.

Terrific performance from the Reds. Managed to solve the #1 problem of the season (conceding high quality chances) while looking a constant threat in attack.
Hats off to Klopp and the brains trust for the change of shape and approach #lfc

It is no secret that those of the Reds persuasion had more than a feeling of trepidation heading into the clash, considering City’s form and that of Liverpool’s.

But as Klopp said in his programme notes, “in football you always have a chance to turn a not-so-good situation into a really good one.” The Reds did just that.

What a win it was – one few saw coming but hoped that it would. These are the performances and results that can turn a season around, Liverpool need to make sure it is just that.