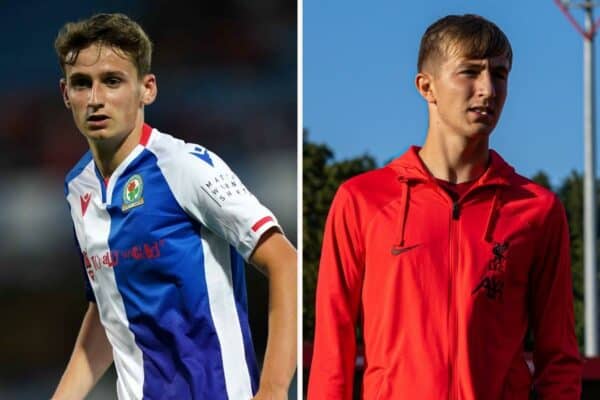 Close friends Tyler Morton and Max Woltman both picked up Man of the Match awards for their loan clubs, while one Liverpool striker netted again.

After a gradual start at Blackburn, Morton has now cemented himself as a key player for Jon Dahl Tomasson, and Saturday brought arguably his best performance yet.

Deployed as the deepest-sitting midfielder as Rovers hosted Rotherham, the 19-year-old dictated the play throughout a comfortable 3-0 win at Ewood Park.

Morton’s ghosting run into the box saw him win a penalty for the opener through Ben Brereton Diaz, before another from the striker and a late effort from Sammie Szmodics sealed the victory.

The teenager was given the Man of the Match award for his efforts, with LancsLive‘s Elliott Jackson hailing Morton’s “his best game in a Blackburn Rovers shirt,” having shown “what we have been waiting to see from him.”

Some say he's still out there, running the show… ?#Rovers ??? pic.twitter.com/53AOJSLWCC

Having come up through the academy together after being spotted playing for junior side Greenleas FC, there will have been a sense of pride as Woltman joined Morton in earning Man of the Match status.

Woltman’s distinction came despite only coming on at half-time during Doncaster’s 1-1 draw with Leyton Orient, with Harrison Biggins scoring a second-half equaliser for Rovers.

“Max was good and showed a lot of energy with his pressing, when he got on the ball he had some nice touches and got us moving,” Doncaster manager Gary McSheffrey told the club’s official website.

? A brilliant impact off the bench saw Max Woltman voted as your man of the match in the draw against @leytonorientfc. #DRFC https://t.co/IptNDNmzr6

“He saw things and players moving off him, he was a real outlet and almost created a chance for himself but the defender made a good block.

“He did everything we asked of him and now with a performance like that he’s given himself a real chance of getting more minutes on the pitch.”

Elsewhere, there was another goal for Fidel O’Rourke as Caernarfon Town thrashed Flint Mountain 4-0 in the Welsh Cup, while Conor Bradley played 78 minutes in Bolton’s 1-0 defeat to Forest Green Rovers.

Vitezslav Jaros kept a clean sheet as Stockport beat Bradford 1-0, and Marcelo Pitaluga helped Macclesfield through to the fourth qualifying round of the FA Cup with a 6-1 victory over Bamber Bridge.

Adam Lewis was taken off at half-time as Newport County suffered a 1-0 defeat to Rochdale, while Leighton Clarkson returned following a three-match suspension only for Aberdeen to lose 4-0 to Dundee United.

Nine players were out of action, with one of those, the injured James Balagizi, dealt another setback on Sunday as Crawley manager Kevin Betsy was relieved of his duties.

Betsy had been instrumental in bringing Balagizi to the League Two club, having worked with him at England youth level, but now there is less clarity over the 19-year-old’s position.