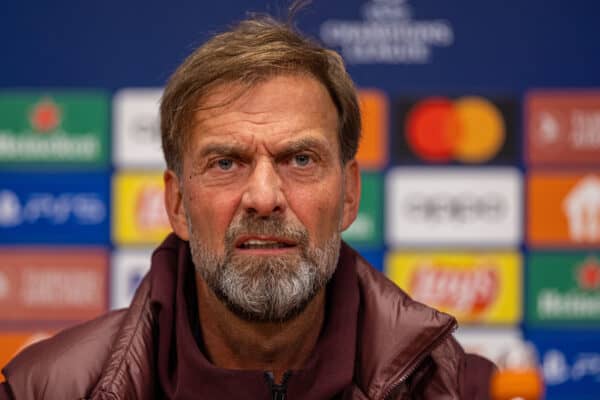 Liverpool stuck in “tricky” injury cycle after “too many” fitness issues

Jurgen Klopp has emphasised the significance of injury issues in Liverpool’s “difficult situation” as they attempt to find more consistency this season.

The Reds are currently eighth in the Premier League after a 1-0 defeat at Nottingham Forest on Saturday, their third top-flight loss of the campaign.

They have had a number of players unavailable and while Darwin Nunez and Ibrahima Konate could return from injury in Wednesday’s Champions League game at Ajax, the likes of Thiago Alcantara, Joel Matip, Luis Diaz and Diogo Jota remain sidelined.

Naby Keita and Alex Oxlade-Chamberlain are ineligible having not been included in the Reds’ squad for the group stage.

Boss Klopp – whose side will seal last-16 qualification if they avoid defeat at the Johan Cruyff Arena – told a press conference on Tuesday: “We see the performances and they’re not as stable and consistent as they were, that’s clear.

“Explanations for that – injuries a little bit.

“We couldn’t put in so far consistent performances, that’s the point we know.

“But we were now actually in a good moment until we lost against Nottingham Forest, in a strange game, with a lot of problems for us – some players were injured, some were not allowed to play but were there, let me say it like this.

“Then you play against a deep defending side and you lose a game after a set-piece which we should win.

“Do I expect us to play better, consistently? Yes. Am I ready to make the necessary steps to get there? Yes. Very good performances on a consistent level don’t fall off the trees, you have to work for it, and you have to go for it in the long term.

“It’s what we are doing. We are working on trying to turn each screw and will do that without being nervous or thinking something is going against us.

“We know it’s a difficult situation, it will be difficult tomorrow against Ajax. But I think it makes sense anyway to be optimistic, and that’s what I am.”

When asked if it was close to clicking for Liverpool, Klopp said: “What you need when it’s really clicking is consistency in the line-up as well, and we can’t do that at the moment, not at all.

“And obviously that situation is not sorted overnight. Yes, players are coming back.

“But you asked if Ibou (Konate) is now ready to play. He trained first day properly yesterday. He was not long out, but he had a muscle thing – does it make sense to bring him in for 95 minutes? I’m not sure.

“Same with Naby, he needs to train, Oxlade, needs to train. They’re both not in the Champions League squad anyway because everybody told me they would be out for longer, but now they are back – which is good.

“Curtis (Jones) is back, a few others are, and of course that is all helpful. No complaints, no moan – it’s just a situation.”

Klopp added: “We will see what we can do tomorrow. I’m really looking forward to the game, I’m really positive, it’s Champions League, it’s Ajax, big names, big game, it’s all good. We have enough players here, so we’ll give it a proper try.

“With the squad we have at the moment, our squad is not too small, we’ve had just too many injuries and that’s a problem. But for tomorrow, we have enough players here so good news.”