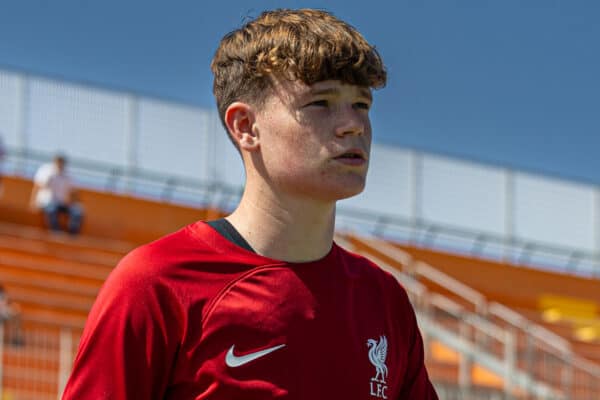 It was a tough afternoon for the Liverpool under-18s, with five 16-year-olds starting in a 1-0 loss to Wolves, as three key starters move up an age group.

That saw almost half of his U18s side having yet to celebrate their 17th birthdays, with centre-back Kerron Samuels, stand-in right-back Francis Gyimah and the front three of Trent Kone-Doherty, Ranel Young and Jayden Danns all still 16.

Midfielder Kyle Kelly came in to make his full debut days after signing his first professional contract, but it was a difficult test for the young Reds in Wolverhampton.

The game was decided by a single goal in the fourth minute, with Wolves centre-back Caden Voice heading home from Josh Esen’s corner before the hosts dug in for the victory.

There were chances for Liverpool, of course, with Gyimah hitting the bar and both Kone-Doherty and Tommy Pilling trying their luck from range in the first half.

But it wasn’t to be, and instead the loss will be seen as vital experience for a number of players making their first forays into U18s football.

The headline news may be, however, that midfielder James McConnell has joined forwards Ben Doak and Lewis Koumas in making the step up to the U21s after a bright start to the campaign.