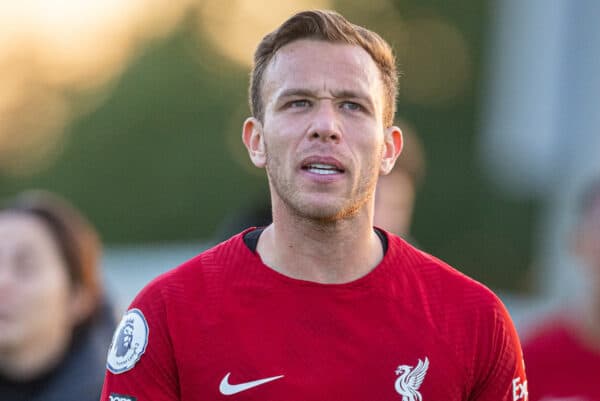 Jurgen Klopp insists that Liverpool won’t look into cutting Arthur‘s loan deal short in January, despite the midfielder facing an indefinite spell out.

Arthur, a deadline-day arrival from Juventus, was on track to build up his minutes with Liverpool after sacrificing time off to train and play with the under-21s.

But a muscle injury picked up at the start of October has forced the Brazilian to undergo surgery which will rule him out beyond the end of the year.

It was initially reported that Arthur will be out for up to four months, but speaking in his pre-Leeds press conference on Friday, Klopp suggested it could be even longer.

Realistically, the 26-year-old is now not likely to play a big role for Liverpool, but Klopp has ruled out a return to Juventus in the winter transfer window.

Whether that is due to there being no termination clause in the deal is unclear, but the manager cast doubt over his involvement with his injury “really serious.”

“Yeah, when he’s back, we will think about [whether we can include him] again.

“But in the moment it’s too far away to make [a decision]. I have no idea how long it will be, but it will be long. It’s a really serious injury.”

It is not encouraging news for Arthur, whose spells with Barcelona and Juventus were also blighted with injury, facing the prospect of playing catch-up late in the season.

While Liverpool’s midfield situation is far from ideal beyond their temporary No. 29, the hope will be that in Thiago, Jordan Henderson and Fabinho there is a strong core to rely upon.

Curtis Jones and Alex Oxlade-Chamberlain are now both fit again, while James Milner remains available and Naby Keita is building up his fitness in training, which gives Klopp further options.

That Arthur will not be sent back to Juventus in January does not rule out another addition to the Liverpool squad, however.

He was always seen as a stop-gap signing, and if the right option presents itself, the club would almost certainly push for a much-needed mid-season transfer.