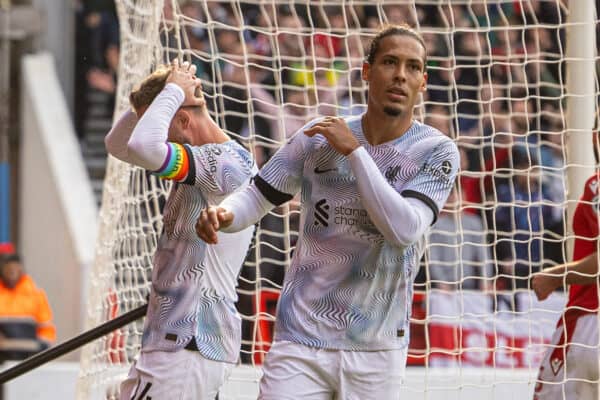 The media bemoaned Liverpool’s insipid 1-0 defeat away to Nottingham Forest, with huge concern surrounding the Reds once again.

Jurgen Klopp‘s men felt like they had turned a corner after two home wins this week – how wrong we were.

Liverpool were appalling at the City Ground, hardly deserving anything from the game and suffering another damaging loss.

Here’s how the media assessed an awful outing by the Reds.

Liverpool were simply not good enough at the City Ground…

The Guardian‘s Ben Fisher felt the Reds were a shadow of their former selves:

“At this point last year Liverpool were a formidable force, unbeaten and blowing teams away at will.

“They had just won successive league games 5-0, one of those a rout of Manchester United at Old Trafford days after victory at Atlético Madrid in the Champions League.

“Liverpool, all in white, were a pale imitation of that team.”

“Liverpool remain without an away win in the league this season.”

The Independent‘s Jonathan Veal feels this was a major step in the wrong direction:

“The Reds looked to have turned a corner after wins over Manchester City and West Ham in the past week, but after a Wednesday night to Saturday lunchtime turnaround that Klopp hates so much, this was a setback in their attempts to claw themselves back up the table.”

BBC Sport‘s Neil Johnston said the performance couldn’t have further from the one against Man City:

“Liverpool looked to be getting back into some sort of rhythm with wins over Rangers in the Champions League followed by back-to-back Premier League victories over Manchester City and West Ham.

“Yet they remain without a Premier League away win this season, with their last league success at the City Ground way back in October 1984.

“This was a million miles away from the gripping victory over City at Anfield six days ago.”

The Echo‘s Ian Doyle lambasted yet another below-par showing:

“It wasn’t as if Forest were brilliant. They are, of course, struggling for a reason.

“But all it took was an application of simple defensive organisation and a bit of fight to frustrate the Reds and knock them out of their stride, even if it ultimately required heroics from goalkeeper Dean Henderson during injury time to preserve Forest’s victory.

“That Craven Cottage calamity back in August now looks more a portent than the one-off Klopp hoped it would be, Liverpool still to win a game on the road in the Premier League this season.

“This was a bad, bad end to what should have been a week that kickstarted their campaign. What next? Who knows. And that’s the worry.”

There was poor performers everywhere…

This Is Anfield‘s Mark Delgado was disappointed with a more restrained Curtis Jones:

“It has been quite the regression down the pitch for what started out as an offensive-minded, creative outlet.

“If Jones has played centre-mid in a two before at senior level it can only have been for a few minutes.

“There were aspects of his game which suited it on the day: the Reds had loads of the ball and he was in possession in deep areas, lots of space, able to turn away from challenges as he likes to and push us further upfield.

“Defensively though it was never going to be ideal and especially when he was often (surprisingly) sat behind Fabinho, who was entirely ineffective once more.”

“When Salah went down off the ball there was genuine concern from all associated with Liverpool. And when replays showed he had gone down without noticeable contact, those worries will have only heightened.

“Ultimately, the knock wasn’t a serious one and he was able to continue – but it was a frustrating afternoon for the Egyptian superstar.

“Deployed as one of two central strikers, Salah was unable to influence the game in the way he so often does.

“Salah has always done his best work from the right-hand side and there looked plenty of scope to trouble Forest in those areas.”

Goal‘s Neil Jones thought Joe Gomez has a shocker of a game:

“He must have thought he’d gotten away with it. A yellow card, yes, but a necessary one. Having dawdled in possession on the halfway line, Gomez had seen Awoniyi cut out his attempted pass to Van Dijk, forcing the defender into a desperate grab of the shirt.

“It proved costly; from the free-kick, Forest fired the ball in from the right, the ball ricocheted against the post and Awoniyi pounced.

“Gomez was man of the match against City last week, but since then he’s given up a penalty against West Ham and delivered this shaky display at Forest – one which ended with him being berated by his manager for being too timid in a challenge. Like Liverpool, he has shown flashes of his old self, but been unable to build any real momentum.”

What now for the Reds?

Liverpool’s upturn in fortunes was premature, according to Delgado:

“Clearly, the corner we need to turn is a longer one than we thought and we’re very much not there yet.

“But there’s no time to linger as around the corner is another mammoth task, a Champions League game we need a result in.

“Draw at Ajax and we’re through to the last 16, giving us both a free hit in matchweek six and time to really get into a better groove before the knock-outs start in 2023.

“This was, all told, a horror of a match and it needs to be put in the past very quickly.

“Consistency comes one game at a time and this was not it, so back to the beginning.”

“Yes, there were injuries and Thiago and Darwin Nunez might have made a difference, as would long-term absentees Luis Diaz and Diogo Jota, but the performance wasn’t up to scratch.

“Salah was nowhere to be seen, barely registering any touches and the team’s best creative moments came from a young Harvey Elliott and aging James Milner. Klopp simply has to do better than that.

“Injuries are one thing but just two points from five games on the road is unacceptable for team with Premier League title aspirations.”