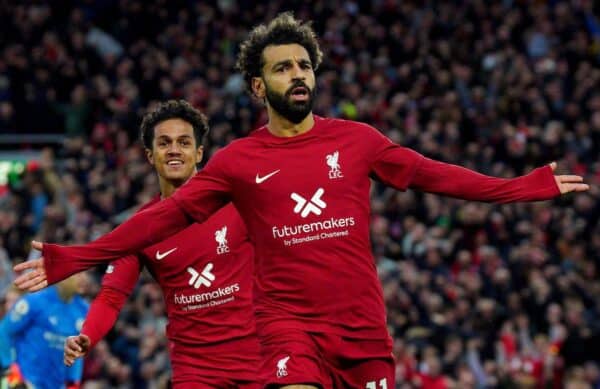 Mohamed Salah moved one step closer to a remarkable Liverpool record on Sunday, with his goal against Man City lifting him above Steven Gerrard.

Salah netted his sixth goal in the last six games as he took down Alisson‘s long ball on the turn and beat Ederson to seal a 1-0 victory at Anfield.

It was a priceless moment in a high-intensity clash, and it has restored hope for Liverpool after a dismal start to the season.

The Egyptian has now netted nine goals and laid on four assists in 14 games this season, with three of those goals coming in the Premier League.

That effort on Sunday was Salah’s 121st for Liverpool in the English top flight, moving him clear as the club’s second-top Premier League goalscorer since the competition began in 1992.

He was previously tied with Steven Gerrard on 120, but now only Robbie Fowler (128) is ahead of the 30-year-old, who will almost certainly take top spot before the end of the season.

According to Opta, Salah is only the second player in Premier League history to score 100 or more left-footed goals – the other being Fowler (105).

Overall, including his stint with Chelsea, Salah has struck 123 times in the Premier League, with his goal against City drawing him level with Dwight Yorke.

That makes him joint-18th across the entire division, with Nicolas Anelka (125), Robbie Keane (126) and Jimmy Floyd Hasselbaink (127) just ahead.

With the forward having signed a new three-year contract in July, tying him to Liverpool until 2025, there is a chance he could even break the top five, with Sergio Aguero (184) currently fifth.

In terms of Liverpool’s all-time top goalscorers, Salah (165) is eighth, but only eight goals away from leapfrogging Kenny Dalglish (172) into seventh.

Fowler (183) and Gerrard (186) are also feasible targets for the No. 11 between now and the end of the campaign, which would place him fifth.