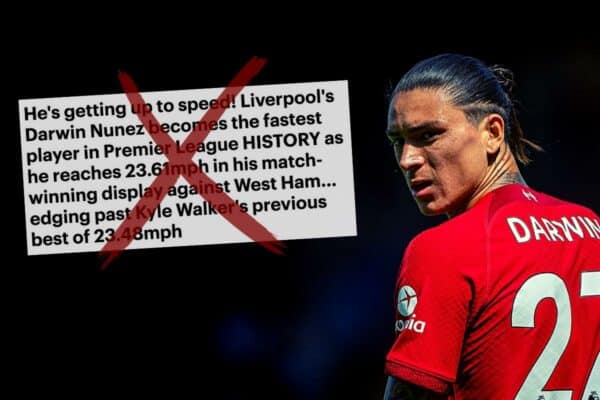 Despite click-hungry Twitter accounts and tabloids reporting the contrary, Darwin Nunez is, in fact, not the fastest player in Premier League history.

Nunez produced an outstanding performance against West Ham on Wednesday night, with it something of a coming of age for the No. 27 at Anfield.

The Uruguayan headed in his first home goal for the club to seal a 1-0 victory, and only the woodwork and a series of fine saves from Lukasz Fabianski kept him from scoring more.

During the Amazon Prime broadcast, commentator Ian Darke mentioned that Nunez had clocked the fastest sprint speed of any player in this season’s Premier League, which then took on a life of its own.

Soon, it was claimed that the 23-year-old had recorded the fastest speed ever in the English top flight, with his 38km/h beating Kyle Walker’s record of 37.8km/h.

That was soon regurgitated by a variety of Liverpool fan accounts, along with newspapers such as the Mail and the Daily Star.

Of course, the statistic was never sourced, with Darke’s commentary misinterpreted, and now Opta have revealed that it is far from the truth.

36.5 – The fastest recorded top speed in the Premier League this season was 36.5 km/h by Darwin Núñez against Fulham.

Nunez has run faster than any other player in the Premier League this season, though that did not come against West Ham, and he is in no way the fastest ever.

But as reported by Opta back in March, it is not faster than the speeds clocked by Antonio Rudiger (36.7km/h), Mohamed Salah (36.6km/h) and Adama Traore (36.6km/h) last season.

It is still a ridiculously fast speed, with previous chart-topping sprints in past Premier League seasons typically hovering around the 35km/h mark.

However, with methods of tracking changing on a regular basis – along with the Premier League‘s official provider – it is almost impossible to reliably judge sprint speeds season by season.

This should, more than anything, simply be another example of why you can never believe everything you read, even if social media pages with high follower counts claim it as fact.