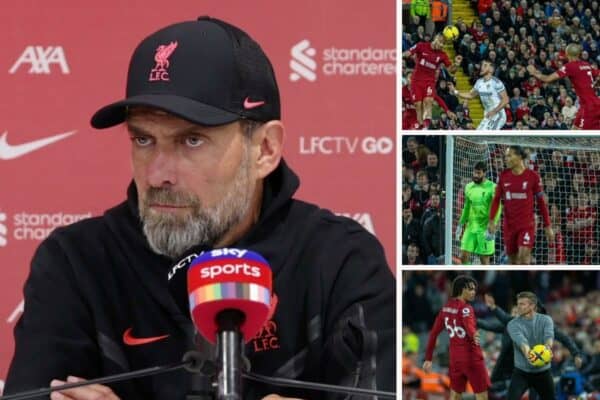 With Liverpool eight points off the top four after defeat to Leeds, Jurgen Klopp says his team need to “play smarter” and that Champions League qualification isn’t his “main worry” at the moment.

“Not now for an overhaul”

Liverpool’s form this season has been worrying and, given the Reds were just two games from a quadruple earlier this year, the question on everyone’s lips has been why?

However, with the games still coming thick and fast, Klopp insisted now’s not the time for a massive rethink.

“It’s not now for a main overhaul. Now, we have to fight through and fight for momentum and confidence and security,” he told reporters.

“I would have taken a point tonight. It’s fine, go from there.

“My main issue with this game is how we defended the second goal.”

Despite four wins from five in Europe this season, qualification for next season’s Champions League is in the balance.

“We cannot qualify for the Champions League if you play as inconsistent as we do at the moment,” he admitted.

“We have to fix that and we will see where we end up.

“We all know that a lot of things are possible, but for that, you have to win football games and we haven’t done that often enough yet.”

The boss believes Liverpool started well against Leeds and that the opening goal was unfortunate, but was less pleased with the performance after the break.

“We have to play smarter in moments against the compact formation that Leeds obviously had,” he said.

“We need to be calmer in moments and I know that sounds ridiculous when you want to score goals but in football, it’s like this, that you have to change the rhythm.

“We should control it, we should let them run. We don’t do that good enough in the moment and that leads to situations where we lose the ball again or cannot finish it off – and that means space for a counter-attack.”

Why Napoli can’t be a dead rubber

With both Napoli and Liverpool already qualified for the Champions League last 16, Tuesday’s clash with the Luciano Spalletti’s side could be seen as a game of little importance in some quarters.

Klopp, though, knows his side can’t pass up any opportunity to gain some momentum, with an important Premier League tie away at Tottenham to follow next Sunday.

“You have to do the simple stuff right then you get confidence and momentum, but today we couldn’t gain it,” he said.

“It’s a home game. It’s Liverpool vs Napoli and we should put in a proper performance, I would say.”