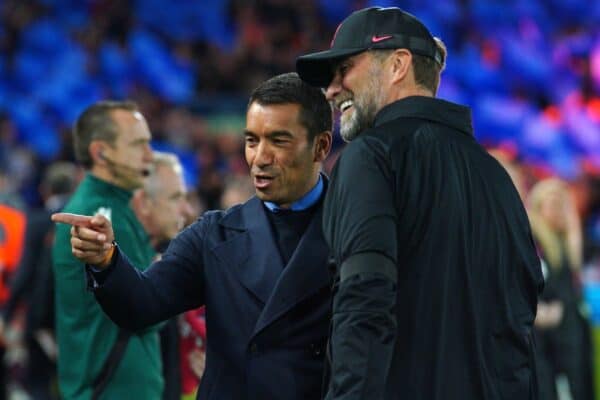 Giovanni van Bronckhorst admits Rangers need a positive result against Liverpool in their Champions League clash at Ibrox if they are to have a chance of playing European football after the turn of the year.

The Light Blues meekly lost 2-0 at Anfield last Tuesday night and sit bottom of Group A with no points and no goals after three fixtures.

After the visit of the Reds on Wednesday night, Rangers travel to group leaders Napoli, who have won all three matches and are three points ahead of the English giants, before finishing the campaign at home to Ajax.

With Europa League football the only realistic possibility left as third-place finishers, Gers boss Van Bronckhorst, whose only new injury doubt is midfielder Glen Kamara, knows the Govan side are in the last chance saloon.

He said: “We all know Liverpool really well because of all the games they play in the Champions League and Premier League.

“We are playing against a strong side. We have to find more moments in the game when we can be dangerous.

“Of course our approach will be different tomorrow because we need points to hopefully play after the break in Europe.

“But, we are still going to be up against a very good side.

“We want to be able to proceed in Europe when we play our last game at home against Ajax. Hopefully we are in a situation where, with a good result, we can continue in Europe.

“That means also we have to get points out of the next two games because Ajax are already on three points.

“We need to get points. Ideally three points and we have to see the other results.”

The Dutchman, however, insists Rangers need to keep 11 men on the pitch to have a chance against the Merseysiders.

In their last Euro game at Ibrox against Napoli last month, the home side were holding their own until defender James Sands was sent off before eventually losing 3-0 to the talented visitors.

“We have had some strong performances in Europe last season and even this season, against Napoli,” said the former Feyenoord boss, who has already decided which of his two strikers, Antonio Colak or Alfredo Morelos, will start, but would not reveal which one.

“That was a good one against a very strong opponent.

“We were in the game until the penalties and the red card. That gave us confidence to get something from home games.

“Tomorrow we have to have the same approach, the same performance and keep playing with 11 men.

“In Europe playing with 10 men is a really difficult task. So that is really important.

“That is always important, to make the right decision and to make sure you are focused on the game.

“It is going to be hectic because the playing style of Liverpool is quite direct at times and I also mean hectic in those moments with long balls and runners and they have a lot of pace.

“But a very essential part of the game is also mentally, we have to be strong in every moment we face and make sure we stay with 11, that is for sure.

“Make sure we get stronger when the game proceeds rather than not getting the right decisions at the right moments.”