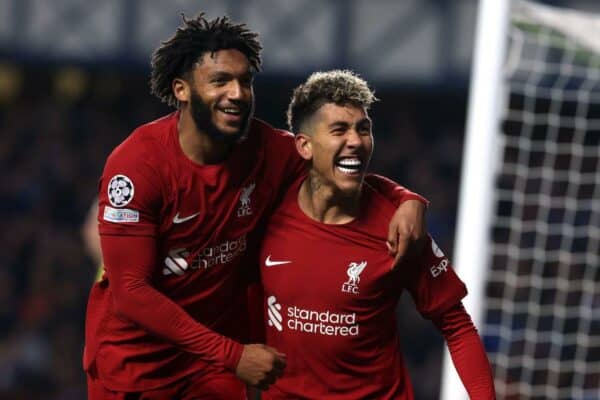 Across the span of 90 minutes in Glasgow, Liverpool ran the entire spectrum of footballing mood music on their way to a convincing outcome.

From the familiar concept of conceding first, to being vaguely fortuitous to be going into the interval on level terms, Jurgen Klopp’s men ran riot during a 32-minute second-half spell of white-hot endeavour which still came with no guarantees of the corner having been turned.

Seven goals were scored, inclusive of a record-breaking Mohamed Salah hat-trick, and now just one point is needed from the last two group games to secure a place in the knockout stages.

After a suspect start, Ibrox largely went as well as could be hoped – and more!

Rangers were always going to fly into this one. When at home in European club competition and surrounded by doubt, the generally accepted approach for underdogs is to go for it early, in the hope of unbalancing your illustrious opponents enough that it affects them for the entirety of the evening.

The dream of catching them cold on an off night when they just don’t fancy it, it’s one of those cases of ‘here is Plan A, for information on Plan B repeat Plan A’.

For a while it was an approach that worked for the home side, and we predictably conceded first yet again, as our defensive line was dragged across to the Rangers right and our midfield once again switched off. An incisive move that was also laced with a subtle touch of luck in the build-up. Before long, Joe Gomez was almost presenting them with a second big gift.

It took seven minutes until Bobby Firmino scored the least Bobby Firmino-like goal he’s possibly ever netted. Corner swung over, near post flick of a header, it was formulaic and lacking in the type of esoteric aesthetics we have come to expect from the Liverpool number nine, the bohemian Brazilian going a bit Anglo-Saxon almost. It was the sort of ugly goal that Darwin Nunez is meant to score.

From a Rangers perspective it was an abysmal goal to concede, something you’d expect to see school kids indulge in. From here, they would make a token effort to stay in the game either side of the interval, but you sensed that should they concede next then positive events would soon escalate further for Liverpool, no matter what levels of dysfunction they have been taking part in so far this season.

Gomez finally settled into his task and was the provider of Firmino and Liverpool’s second; 11 minutes later it was Firmino the audacious provider for Nunez, who – whisper it – has now scored in successive games.

Salah even played a beautiful part in Liverpool’s seventh. Nothing to do with the build-up, more his loving caress of Harvey Elliott while the teenager was awaiting confirmation from VAR that he had scored his very first Champions League goal. Find yourself someone to hold you the way Mo holds Harvey and you’ll be eternally blissed out.

Patience was key for Liverpool. Firmino was being written off last season and was a player on many supporters’ fantasy summer selling lists, yet here he is, having largely carried the club across the breadth of the last few fractious weeks, reconnecting with an inner footballing child that appeared to be lost to us for good, his resurgence something akin to Elvis’ ’68 Comeback Special, where it’s all in the hair, the hips, and the curling lip. It shouldn’t be on the menu, but here it is.

If a troubled 2022/23 season eventually amounts to something valuable, it will be because of the brilliance of Firmino during the darkening days of autumn. He has been one of the limited shining lights for Liverpool of late, but his enthusiasm and style is utterly infectious both on the pitch and in the stands. We shouldn’t be surprised really, but his is a warming return to prominence.

The loss to beyond the World Cup of Luis Diaz is undeniably massive, but with the reduced options going forward that this brings, Firmino’s form can be a conduit from which Salah and Nunez prosper too.

Having now scored 14 goals in their last four games, as one area of Liverpool’s play begins to heal itself, the hope must be that other positions can follow suit.

As out goes Trent Alexander-Arnold for now, back comes Andy Robertson; as out goes Joel Matip, back comes Ibrahima Konate. We would be aided by the revolving door partnerships for Virgil van Dijk settling. Exposure issues continued to stem from midfield in the early acts on Wednesday evening.

I was ‘in on the ground floor’ when it came to Jordan Henderson as a Liverpool player, and there have been times when he has been unfairly targeted for criticism over the last 11 years or so, during which I’ve been a keen defender of him on many occasions, but his game has undeniably gone into reverse during the last two years.

Something must now give though, whether that entails a return to the imperious form that made Henderson a Champions League and Premier League-winning captain, or a gradual phasing out. The harder of the two options for his detractors would be the former.

He isn’t alone, however. It’s hardly new thinking, but neither Fabinho nor Thiago are reaching the levels they are capable of, while Elliott aside, the alternatives are either aged, injured, or anonymous. I am periodically taken by surprise that Alex Oxlade-Chamberlain and Naby Keita are still on the books at Anfield.

Sunday now looms large upon the horizon. Having manufactured ourselves some far healthier-looking prospects in the Champions League since our opening night capitulation in Naples, now we turn our attentions of improving our Premier League situation.

There may be more pain to experience before the pleasure begins to kick in, however.