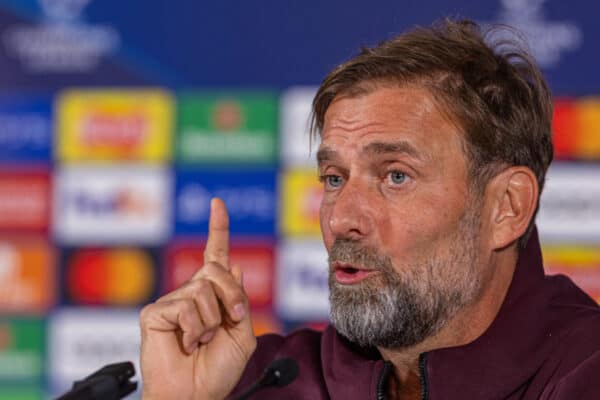 Jurgen Klopp‘s comments on the financial disparity in football, particularly relating to Man City, did not take long to create a spark on social media.

Liverpool meet Man City on Sunday in a clash that many have grown accustomed to defining as a meeting of the two title favourites, although it is not quite the case this season.

A total of 13 points separate the two teams and when Klopp was asked what Liverpool must do to keep pace with City, the manager didn’t beat around the bush.

“Nobody can compete with City in that. You have the best team in the world and you put in the best striker on the market. No matter what it costs, you just do it,” he told reporters.

Klopp went on to say that for clubs like Man City and Newcastle, state-owned, there is “no ceiling” but “some other clubs have ceilings” to which they must extract the most from.

Liverpool have had to do just that to even compete with City and Klopp’s words stuck a chord with football fans across social media:

Knew as soon as I saw Klopp’s quotes last night that the majority of fans on here would misconstrue them and use them to complain about his spending. There’s a clear difference between how City & Liverpool can spend money. Anyone ignoring that can’t look beyond their own bias ?

How can anyone even say he is anything other than completely correct? Those clubs and others like them are killing the sport. https://t.co/E3THhONF5A

Liverpool bought Nunez with money they generated themselves; it wasn't a gift. If it proves to be a mistake, it will absolutely screw them. If Grealish, for example, proves to be an error for City (I don't think he will) it won't even register. This isn't complicated.

Took a bit of stick for saying the “City have bought the league” line because “Man Utd have spent more!!!”

If you can’t acknowledge the advantage they have, you’re kidding yourself. City would still be a mid-table PL club without the ownership change.

Can’t stand the man but he’s right on this. State funded clubs need some additional FFP protocols brought in because it’s frankly making football uncompetitive and boring. Not to mention the fact they’re flat out cheating the system on top of that. https://t.co/gJvij1WfAG

He’s right, you know. Liverpool did well to compete, they spent serious money to do so. They also had a limit. And we find ourselves rooting for billionaire capitalists as a grasp for purity. The gig is fucked. https://t.co/gckvTAForO

He’s moaned a lot lately but this is spot on, how do you beat the them when they can buy whoever they want them PSG and Newcastle killing football https://t.co/YUEwHwmdxp

As much as rival fans might not like to admit it, the bottom line is that Klopp’s genius has been the only thing keeping the PL competitive over the past five years. Without him working miracles City would’ve walked it every single season, as they most likely will do this time. https://t.co/xVcP4HxaDd

When you get 97 points in a season and a nation-state/sportswashing/financially doping/FFP Breaking Team gets 1 point more than you, then you have earned the right to say this.

(And now CITY having Haaland is just taking the piss.) https://t.co/OBCvlHR9KC

He’s right if you think of how regulators have/haven’t been unable to enforce owns rules. Premier League’s investigations into Man City now into fourth year without an outcome. While Uefa has failed to administer its own FFP outcomes repeatedly when it comes to state teams https://t.co/TaUQfdL9q4

Do these arseholes not realise that the issue Klopp is raising is sports washing and financial doping ? Why are they deflecting it and making it an issue about spend when Madrid/United spend equally or more and don't grt criticised the same way PSG and City do ? https://t.co/km88PUCCvX

Have to respect the guys like this who hate Liverpool so much they can never accept that Klopp may be right about anything ever https://t.co/cDj2rnYiJx

Klopp is 100% right here. City aren't even winning the league at the moment but they're still 1/5 to win it. It isn't just the fees either it's the salary. Haaland is on nearly a million a week that's just obscene.

It would have to be global but salary cap is the only solution https://t.co/Yx6YdLtKms

He’s talking the truth their. Furthermore when you look at it. How Klopp has managed to compete for so long against this type of financial super power is very impressive. Arsenals go. https://t.co/7J4is4RI1g

Been saying this for a LONG time on here. And before that – on RAWK.

Klopp is right – but it is even more insidious than he is even saying. And people cheer for it because they are fucking stupid. It will ruin the sport they love. https://t.co/xAZzAcVteQ

English football has been corrupted and there is no going back. The likes of Richard Masters should hang their heads in shame. Great stories like Leicester winning the league are no longer possible. State owned clubs have seen to that. So what are we in this for?

And what Super Clubs like Liverpool can spend is a huge problem. But the answer to inequality isn’t more inequality, and worse inequality. City or PSG can weather a 60m signing not working. Liverpool can’t. Klopp has needed every step to be perfect for five years. Unsustainable.

Amid all of that, there were short-sighted views that Liverpool spent more for Darwin Nunez than City did for Erling Haaland in the transfer window, factually correct, but it misses the point entirely.

City can spend without too much risk attached and they can dip back into the market if needed, but for other potential contenders, one wrong sizeable outlay can seriously set the club back.

Clubs are all in the same league but are competing in an entirely different one, the competitive balance is skewed in one direction, to those with the superior financial capabilities.

Liverpool, of course, have at least made the Premier League competitive in recent years and, yes, they can spend more than others down the table but the unpredictability of the sport, like Leicester winning the league, is being eroded.

The question should be why is it only ever Klopp that is prepared to speak on the issue?