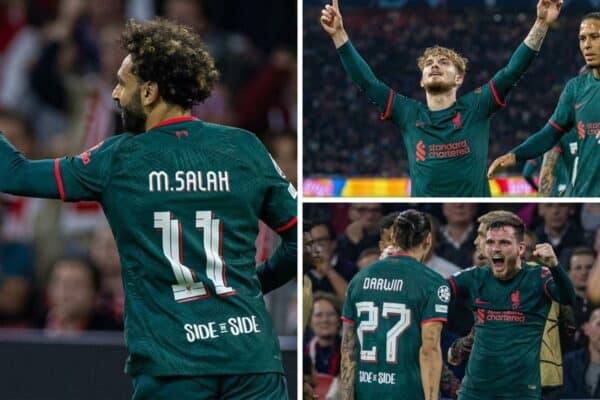 The good, the distraction, and who in last 16? – Last word on Ajax 0-3 Liverpool

Liverpool eased their way into the Champions League last 16 on Wednesday night, providing the positive of the season so far.

The Reds were second-best in the opening half hour at Ajax, but Mohamed Salah‘s clipped opener changed the game completely.

Darwin Nunez and Harvey Elliott then scored quickfire efforts early in the second half to put the match to bed, securing progress from the group stage.

It was a pleasing result after a woeful defeat at Nottingham Forest – can this be the win to truly spring Liverpool’s season into life?

Here, an all-This Is Anfield trio of Henry Jackson (@HenryJackson87), Matt Ladson (@mattladson) and Jack Lusby (@LusbyJack) discussed a great win and looked ahead to the next round.

HENRY: In the end, it was a really good victory away to tricky opponents.

Let’s face it, it was a shambles to begin with, but Liverpool showed good character and ruthlessness in front of goal, showing that a crisis at Anfield is good form for some clubs!

Robertson, Elliott and Salah were the standouts for me, with the latter really in the groove again after a slow start to the campaign.

Elliott has taken some unfair stick of late, but what he’s doing at just 19 is outstanding – if we’d signed him in the summer, people would be raving about him.

It was also great to see Nunez get on the scoresheet, atoning that horrendous miss with another header. He’s going to be a beast for us, I have total faith in that.

All in all, a good night at the office and that one that the Reds will hopefully build on in these matches leading up to the World Cup.

JACK: Just getting the job done and into the last 16 was enough for me.

But the way Liverpool responded after a dodgy start was really encouraging – though, as we’ve seen, sides in the Premier League will punish those early lapses, unlike Ajax.

As Henry mentioned Robertson, Elliott and Salah were all great, and I thought Gomez and Van Dijk showed renewed strength after a shocker at Forest.

With almost three days between games and all five substitutions used, most of those who started in Amsterdam should be in with a shout of keeping their places against Leeds.

MATT: I’m not sure I’d completely agree that it was a “shambles” to begin with. Contextually, when you look at the change in formation (which I feel was enforced on Klopp really, a case of the best 11 available players), and up against a team who had to win to stay in the competition.

If we weren’t in this period of being pretty dire all season and that game happened amidst a more positive time all around, we’d hardly have blinked at the opening and it would be praise for in-game adjustments, management, calming it down then hitting them on the break. A perfect European away performance.

It will be very interesting to see if we keep this shape (and likely the whole starting 11) against Leeds on Saturday.

HENRY: Maybe the idea of playing in a league with a load of other European teams wasn’t such a bad decision after all! I’m joking – don’t have a go at me!

There is no doubt that Liverpool have looked much more at home in the Champions League than the Premier League this season, though.

Sure, the performances still haven’t been consistently great, but they have looked more slick and less susceptible to being outrun in so many matches.

Ajax are a much better team than Forest, but I genuinely had more confidence in this game than last weekend, which says it all.

Liverpool possess something magical in this competition so it wouldn’t shock me if we went all the way.

Let’s face it, this side is better than the class of 2005, so if they can win it this bunch can, even though improvements are clearly required.

JACK: It’s been a while now that I’ve felt it may be a season similar to Klopp’s very first on Merseyside when we finished eighth but reached the Europa League final.

The squad seems too stretched to keep up with the demands in the league, but there is always magic in the Champions League when it comes to Liverpool.

Remember, Klopp did tell us to book our hotels ready for Istanbul. It could be a more enjoyable ride than the battle for top four!

MATT: Liverpool, especially under Klopp, thrive as the underdog and that’s exactly what we’ve become this season.

Jack mentions Klopp’s first season, and the travelling Reds adopted Three Little Birds again in Amsterdam, perhaps that will be the soundtrack to this season again.

The players are realistic enough to know, internally at least, that the title is gone so why not go for Number Seven?

HENRY: A nice little clash with Club Brugge would do me nicely, thanks.

It would bring a bit of nostalgia with it after the 1978 final when King Kenny did his thing, and be a relatively simple path to the quarter-finals.

I cannot be bothered with Real for obvious reasons – we won’t get revenge, they’ll just bloody beat us AGAIN! – while Bayern Munich would be a massive test wrapped in a Sadio Mane narrative.

PSG have Lionel Messi, Kylian Mbappe and Neymar, so no thanks, while I’m bored to death of playing either Benfica or Porto every season!

JACK: We’ve surely got to play Porto at some point this season, and they’d be a decent test with, hopefully, a comfortable resolution.

I’d say avoiding Benfica may suit Darwin at this stage!

MATT: It would be extremely interesting if we got PSG in terms of away fans going to Paris. A boycott would be something to consider if that happened.

There’s decent odds of a trip to Portugal, and let’s face it, Liverpool love Portugal and there’s worse places for an away trip in March!

So I’ll take Sporting winning their group and a new stadium for Reds and a first competitive game against them please!

Though, we’ve played Porto in each of the three seasons we’ve got to the final under Klopp…