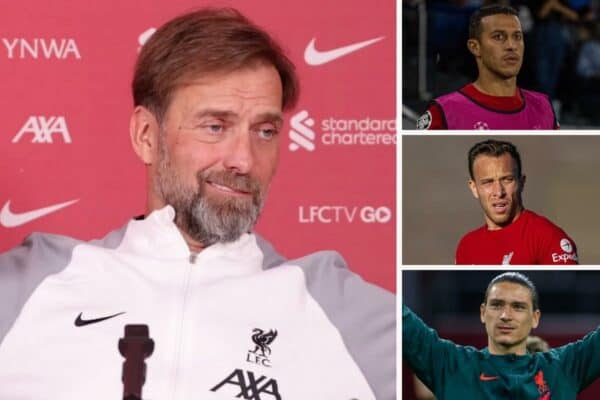 Jurgen Klopp was in a good mood ahead of Liverpool’s clash with Leeds, as he declared Thiago fit and praised the duo of Darwin Nunez and Harvey Elliott.

Thiago’s back after illness

An ear infection that kept the Spaniard out for Nottingham Forest and Ajax has cleared up, and Klopp made clear he’s fit to face Leeds on Saturday night.

Here’s an update on three other injuries:

The loanee played just 13 minutes for the first team before suffering a serious injury setback that will see him out until 2023.

Any hopes of playing at the World Cup went when he required surgery.

Klopp didn’t sound optimistic when talking about the midfielder’s hopes of a return in the medium-term future, but he confirmed his loan spell could not be cut short.

He said: “It’s a long-term injury. When he’s back we’ll think about it again, but I have no idea how long it will be.”

Praise for Nunez after early setback

Nunez is beginning to look like an important part of this Liverpool team, and Klopp was full of praise for the striker who had to overcome an early setback when he was sent off against Crystal Palace.

“He felt embarrassed for himself. Getting a knock back is not cool that he can blame nobody else for,” Klopp said.

“For all these things, his numbers are incredible.”

The boss went on to say he doesn’t know the striker’s ceiling.

“The steps he’s making are really big,” he continued.

“Nobody knows how good he can be but he has to stay fit and be available all the time, and he wasn’t against Nottingham.

“His potential is incredible, not only his speed but his attitude is really good, and he’s a real worker.”

A hint at more change

The Reds have lined up in numerous formations this season as the manager has struggled to find a winning formula, with a plethora of players injured and out of form.

Wednesday’s match against Ajax saw another innovation as Liverpool played more of a 4-4-2 diamond system, but Klopp has suggested we may see another evolution in his side on Saturday.

“We may line up in a different system again and go from here,” he said.

He explained that it’s not about playing the system he prefers at the moment – it’s about fitting it around the players that are available.

Despite the constantly changing formations, Klopp has sought to include 19-year-old Elliott whenever possible so far this campaign, and applauded his consistency during a difficult period for the team.

He said: “He started last season incredibly consistent, he was in the team and was probably the standout player early in the season.

“Now in a team which is not in the perfect moment, he plays a really consistent reason so far. So, good for him and very good for us as well.”

Playing in midfield, goals have been hard to come by for Elliott, but after scoring in each of the last two Champions League fixtures, it is becoming a more regular part of his game.

Klopp reiterated the importance of goalscoring as an attacking player, saying: “In general, scoring goals must be part of the game of each offensive player on the pitch.

“That’s what he’s now, slowly but surely, doing as well.”