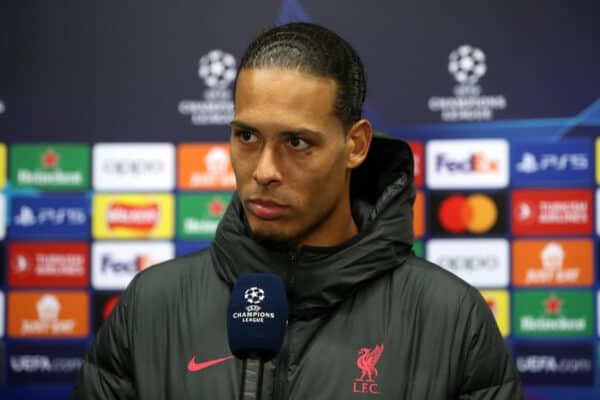 Virgil van Dijk: “We want to show we are Liverpool”

Virgil van Dijk is eager to show the side of Liverpool that are “one of the biggest teams in the world” when they meet Ajax on Wednesday night.

Liverpool have won just one of their seven away games this season, at Rangers, and have three defeats to their name too.

The latest, of course, came over the weekend at Nottingham Forest but it’s not an isolated event, with the Reds a shadow of their former selves both in performances and results.

You never know what Liverpool you are going to get from game to game as on one hand you have the side that beat Man City, and just six days later one that lost to bottom-of-the-table Forest.

It’s not enjoyable from a player’s perspective and Van Dijk touched on the away form ahead of the meeting at Ajax, eager to show “we are Liverpool” in his home country.

“That’s obviously not something we like and something we want to improve as a group and we will try to show the intensity we always want to show tomorrow,” Van Dijk said.

“Every game we play, home or away, is a difficult task and a different ask as well. For example, Forest you play against a deep sitting side and try to break them down, have to be patient.

“Every game is a different ask and we want to improve the situation, the away results, and it starts tomorrow.

“We want to show tomorrow we are Liverpool, one of the biggest teams in the world.

“I don’t think there’s time for shock within ourselves, everyone can look in the mirror and know if they’ve done something well or not as good as they normally do.

“The only way to get this level going again is to play games and we need everyone with that, we need fit players, we need the fans and we need to grind out results to get momentum.”

Despite some of Liverpool’s shortfalls this season, they need just one point at Ajax to secure a place in the last 16.

“We aren’t coming here to defend or get a draw, we want to win, show our quality and get a good feeling from our performance,” the Dutchman said.