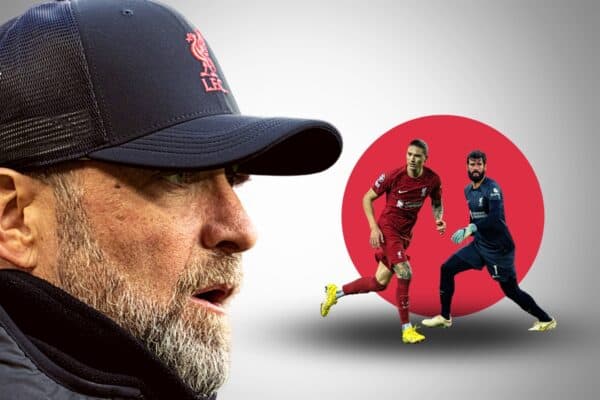 An ill-timed World Cup has put Liverpool’s season on hold but it offers an opportunity to reflect on the first three months of the season, which have been anything but smooth sailing.

Jurgen Klopp said the most important thing he learned after the Community Shield win against Man City was that “the boys are ready.”

It was not quite the case as Liverpool lost once and drew twice in their opening league games, forcing the Reds to play catch-up from the word go.

Inconsistent and plagued by injuries, Klopp’s side have not enjoyed the same fortune they did last season and it’s made for a tumultuous start that has placed the club firmly under the microscope.

While the chance to hit the reset button is now before Liverpool thanks to the World Cup, first, let’s take a look at six things we’ve learned from the Reds’ start to 2022/23.

Alisson the player of the season so far

You dread to think where Liverpool would be without Alisson.

The Brazilian feels he “could be” in career-best form and it would be hard to disagree, with Klopp readily saying “we have Alisson to thank” for a result throughout the season so far.

On one hand, it’s far from ideal to have to laud the efforts of the goalkeeper each game as he should not be needed with as much frequency, but on the other, it’s a testament to his quality.

In the Premier League, Alisson has post-shot xG minus goals conceded of +7.6 – that essentially means he has saved 7.6 goals more than expected, which is incredible.

The next best is Chelsea‘s Kepa Arrizabalaga (+4.7) and he’s only played six league games.

When you also consider he has an assist to his name, there’s no question that Alisson is Liverpool’s player of the season so far.

But 20 first-team players have, combining for more than 140 games missed so far – Liverpool have not been able to catch a break and it’s created a knock-on effect with more players required to play more minutes than what will have been intended, increasing their injury risk.

It has come at a time when Liverpool do not have a permanent club doctor following Jim Moxon’s departure in August, leaving GP and sports physician Sarah Lindsay and head of academy medical Bevin McCartan to fill in.

Moxon’s departure was the latest in a medical department that has seen a high turnover in recent years and has seen questions raised over what is going on behind closed doors.

Seemingly the sooner Liverpool appoint a club doctor the better to create a clear direction that works in tandem with the intense demands required of players in Klopp’s system.

We don’t have to worry about Nunez

You’d have a pretty enjoyable time if you went through all the social media posts writing Darwin Nunez off before he ever really got going at Liverpool.

He’s been labelled the agent of chaos and has more than delivered on that tag, at times you feel even he doesn’t know what is coming next and supporters have embraced it.

Nine goals and three assists in 18 appearances only tell half the story, he works himself readily into shooting positions, 24.5 percent of his overall touches are in the penalty area and his showing on the left wing against Southampton offered a promising look at his all-round game.

He is heavily involved in games and his passing accuracy improved to an average of 73.3 percent over his last four matches – that composure and calmness Klopp has readily spoken of has come to the fore.

Nunez is far from the finished article and has had plenty of harsh lessons to learn so far but he’s showing rapid growth on an individual level and in his chemistry with his teammates.

The next half of the season is going to be chaotic, in all the best ways.

Klopp prepared to be unpredictable

Liverpool have been on a formation journey this season thanks to injuries and the need to breathe fresh life into the side after a drop in intensity.

In the space of four games, Klopp used three different formations and the initial change to 4-4-2 (which looked a lot like 4-2-3-1) resulted in four wins from six.

A move to a diamond formation then lasted two games with promising signs against Napoli then torn apart against Leeds, before a shift back to 4-3-3.

The journey has been to get the team back to being compact as it “makes all the difference” in the words of Klopp, making Liverpool “difficult to play against.”

The initial diversion from 4-3-3 was due to the need to “give the boys new things to think about,” and, in turn, it also kept the opposition guessing.

You feel the 4-3-3 will be a big focus during the training camp in Dubai in December, but that Klopp is prepared to be unpredictable and use the system best for the players available, is an exciting prospect for the remainder of the campaign.

Liverpool have long looked fatigued and they’ve made life harder for themselves by conceding early goals, requiring them to exert more energy than they have available.

In their 22 fixtures this season, Liverpool have conceded first 10 times – with the first goal coming, on average, in the 20th minute of games.

Nine points have been rescued from those losing positions across all competitions, but only two ended with a victory for the Reds.

Andy Robertson, Ibrahima Konate and Virgil van Dijk all admitted the issue, one that even dates back to last season – and it is one of a number of key problems that have defined the campaign so far.

You can point to attitude, fatigue, concentration and personnel – notably in midfield – as the cause, each could be strongly argued.

Thankfully, in the last four games, the issue has not been present but it’s no wonder that Liverpool have looked tired, leggy and subsequently bereft of creativity when they do let the opposition get a head start.

Take from the rich, give to the poor

It’s only Liverpool that could take points from three of the Premier League’s top four in Man City, Newcastle and Tottenham and then lose or draw to Nottingham Forest, Leeds, Everton and Crystal Palace.

Jekyll and Hyde would be quite apt to describe it.

It’s this inconsistency that again brings to the fore the change in mentality when facing a top team as compared to one nestled closer to the bottom of the table.

It’s easy to be ready to attack the game against those at the top, it is much harder not to underestimate the lowly opposition – something Liverpool currently have no right to do.

It’s not an anomaly, this has been an issue in previous seasons and the Reds cannot afford to allow that to continue when they return following the break.

The first four games back in the league sees Liverpool meet Aston Villa (12th), Leicester (13th), Brentford (10th) and Brighton (7th) – three away, one at home – let’s hope the reset during the break makes this a golden run of fixtures.