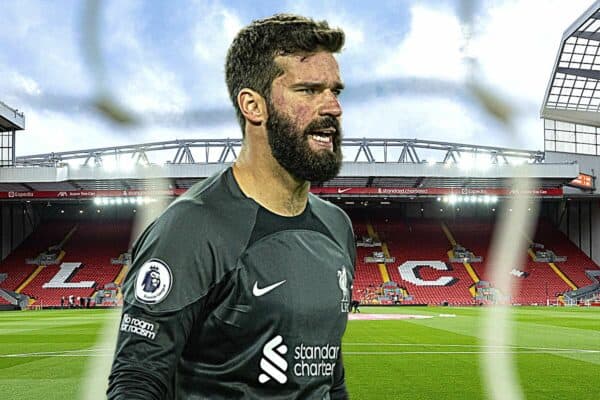 Liverpool host Southampton in their final match before the World Cup today, with Alisson set to bring up a Premier League milestone at Anfield.

The goalkeeper’s next appearance will be his 150th in the league for Liverpool. He has kept 68 clean sheets to date.

Only Alisson and Virgil van Dijk have each played every minute of the Reds’ Premier League campaign so far.

Van Dijk was in the Southampton side the last time they scored at Anfield in the league – in October 2015.

The Reds have not conceded to Southampton in the last 544 minutes of league action at Anfield, including each of the last six encounters, a club record.

At Anfield, Liverpool have won 14 and drawn six, with three defeats against the south coast side.

The two teams have met 46 times in the Premier League. Liverpool have won 25, with 11 defeats and 10 draws.

Liverpool need two more goals for 50 against the Saints at Anfield in the Premier League.

Following the penalty shoot-out win over Derby in midweek, Liverpool are looking for a fourth victory in a row for the first time this season.

They have kept five clean sheets in their last eight matches in all competitions, while at Anfield, of the last six visitors, only Leeds have found the net.

Last Sunday’s win at Tottenham saw Jurgen Klopp record his 250th win as Reds boss in all competitions, in what was his 401st game.

They need one more goal to record 150 in all league meetings with Southampton, with Ian Rush scoring the most (10).

Mo Salah has scored seven times in nine league outings against Southampton. Only Robbie Fowler (8) has found the net more for Liverpool against the Saints in the Premier League era.

Thiago could become only the second Liverpool player to score in three successive home Premier League games against Southampton. Salah was the first. The only other man to achieve the feat was John Aldridge.

The Spaniard’s last goal came in the home win over Southampton last November.

Salah’s two goals against Tottenham took him into seventh place on the club’s all-time league scorers list with 124. He needs four to equal Fowler’s tally.

Curtis Jones is one game away from reaching 50 in the league for the Reds.

Ralph Hasenhuttl, who was sacked by Southampton five days ago, was in charge for 151 league games, winning 47 and losing 68.

His replacement, Nathan Jones, has never faced Liverpool in his career, either as a player or manager, and is the second Welshman to manage the Saints in the Premier League era after Mark Hughes.

Southampton have won four of their last 26 league fixtures, losing 17.

They are one of two teams not to draw away from home in the top-flight this season, Leicester being the other.

Saints have scored four goals away from home during this campaign. Only West Ham, Aston Villa, Nottingham Forest and Wolves have netted fewer.

Their heaviest defeat this season came at the Etihad when they lost 4-0 at Man City last month. They also conceded four in their opening fixture at Tottenham and at home to Newcastle last Sunday.

The 1-0 win at Bournemouth saw them keep their only clean sheet of the league campaign so far.

The Saints are one goal short of recording 100 in all league matches with Liverpool.

They have not scored at Anfield in their last six league visits, with their last goal coming in September 2015, when Sadio Mane equalised in the 86th minute in Klopp’s first league game at Anfield. Mane was then red carded in stoppage time.

Southampton have scored three goals in their last 11 top-flight visits to Anfield – all scored by future Liverpool players – Dejan Lovren in 2013, Nathaniel Clyne a year later and Mane in 2015.

Like Liverpool, Southampton won a League Cup tie on penalties last Wednesday, defeating Sheffield Wednesday after the game had ended 1-1.

Simon Hooper will be the referee at Anfield on Saturday, taking charge of Liverpool in the Premier League for the first time in his career.

He has issued 26 yellows in nine top-flight matches this season.

His most recent match was Wednesday’s Carabao Cup tie between Man City and Chelsea.