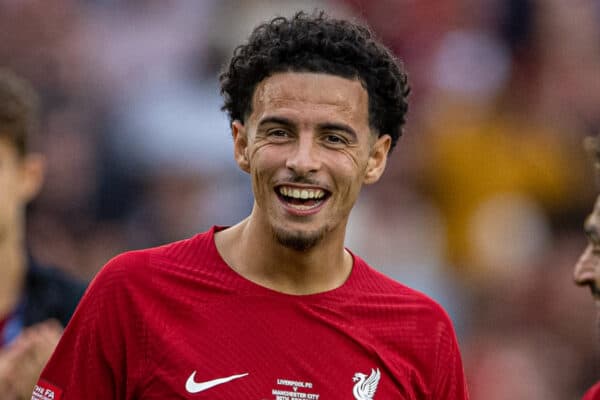 Though there are big changes afoot in Liverpool’s midfield ranks, Curtis Jones will remain a mainstay, with the No. 17 set for a new contract.

Though injuries have blighted his campaign so far, it is clear that Jurgen Klopp has considerable faith in Jones as part of his squad for the long term.

A full-time member of the first team for four seasons now, the 21-year-old has already made 81 appearances for his boyhood club and is expected to hit a century before the end of 2022/23.

His versatility – able to play a variety of roles in midfield and attack – is particularly useful, though it can be argued that it has slowed down his progress in cementing down a starting spot.

Klopp can continue to call upon the Scouser into the future, then, with the Times‘ Paul Joyce reporting that Jones is due to sign a new long-term contract.

Jones’ last deal, penned two years ago, will expire in 2025, but that is likely to be extended until at least 2027 along with improved terms.

It would serve to hold down a vital homegrown slot in the Liverpool squad, particularly as the club could lose at least two such players within the next year.

Alex Oxlade-Chamberlain and James Milner both see their current contracts expire this summer, along with Naby Keita and loanee Arthur, with a revamp in motion in the midfield.

Joyce claims Oxlade-Chamberlain and Keita are “likely to leave,” though another extension for Milner cannot be ruled out as he enjoys a season in which he has already made 19 appearances for the Reds.

Liverpool are likely to bolster their midfield in response, with Jude Bellingham the priority target but the likes of Konrad Laimer and Enzo Fernandez also mentioned.

Losing Oxlade-Chamberlain – and potentially squad player Nat Phillips – would see a homegrown slot open up in the Premier League squad, with Jones needing to be registered as of next season as he turns 22 in January.

Crucially, having been with Liverpool since under-9s level, he would also qualify as a club-trained player in the Champions League, with a minimum of four required to name a full squad.

There is also room for Jones to develop in the years to come, too, and along with Harvey Elliott, Fabio Carvalho, Tyler Morton and Stefan Bajcetic, a new, young midfield core could be emerging.