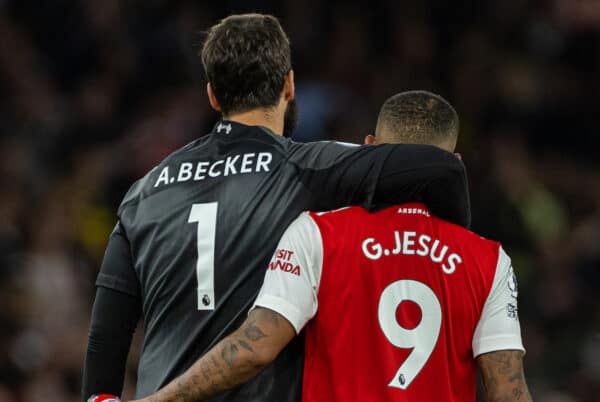 Two of Arsenal‘s most potent forwards, who Alisson will play alongside for Brazil at the World Cup, have explained why the Liverpool goalkeeper is “so difficult” to beat.

The Reds’ No. 1 has been their standout performer this season, in a campaign where many of their outfield players have underperformed so far.

Alisson looks to be in the prime of his career going into the World Cup, where he is set to battle it out with Man City‘s Ederson and Palmeiras’ Weverton for a starting spot in Qatar.

The ex-Roma shot stopper has bailed Jurgen Klopp‘s side out with a series of match-winning saves this season, most recently in Liverpool’s victory over Southampton on Saturday.

Gabriel Jesus and Gabriel Martinelli, who have both excelled this season in an Arsenal side who are five points clear at the top of the Premier League, have explained their admiration for the Liverpool ‘keeper.

“I have played against Alisson in Brazil and he is so difficult,” Jesus told Sky Sports.

“Brazil have really good keepers, even with Everton [Soares] in Brazil, he is so good. We are lucky to have them.”

Martinelli, who did manage to beat Alisson when he scored the Gunners’ opener in their 3-2 victory over the Reds in October, has also been generous in his praise of his Brazil team-mate, recalling his difficulties beating him in one-on-one situations in training.

Brazil are one of the strong favourites to go all the way in Qatar, and if they are to be successful, you would expect Alisson to play a big part.

There’s little doubt about it, Liverpool have the best goalkeeper in the world on their books right now.