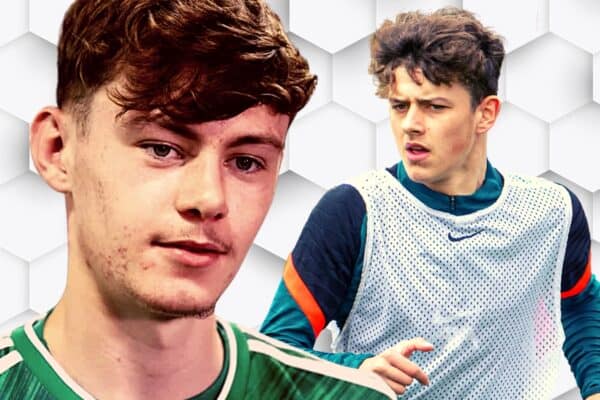 It has been a breakthrough loan spell for Conor Bradley so far at Bolton, but things have been much slower in League One for fellow full-back Owen Beck.

Bradley, on the right of defence, and Beck, on the left, were two of Liverpool’s most outstanding talents at academy level throughout last season.

That translated to a step up to the first-team ranks, with Bradley featuring five times including three starts and Beck coming off the bench against Preston and Leicester.

When it came to their respective loan moves, the summer brought anticipation over the progress of two players widely considered part of the future at Liverpool.

But there have been contrasting fortunes for the pair.

Bradley settled swiftly at Bolton, with four goals and four assists in 22 games so far, but Beck only made his League One debut in November after an aborted stint at Famalicao in Portugal.

To hear more about the situation and how both players are progressing, we spoke to Dan Barnes (@DanBarnesJourno), digital sports reporter at The Bolton News.

What was the reaction among fans when the Bradley deal was announced?

Bolton fans were generally excited when Bradley was brought in on loan.

He had big shoes to fill replacing Marlon Fossey, who impressed during a loan spell from Fulham during the second half of last season.

However, there was a sense of optimism that he could make a big impact in League One this season.

Which role has he been used in?

Bradley has been used in the right wing-back role, which gives him the freedom to get forward and join the attack.

The Whites usually adopt a 3-5-2 system, which means the three centre-backs take up most of the defensive responsibility.

Gethin Jones usually plays as a wide centre-back and has formed a decent partnership with Bradley so far.

And how has he performed? Any highlights?

Bradley hit the ground running at Bolton, scoring three goals in his first 10 appearances for the club and quickly becoming a fan favourite.

His best goal came against Salford in the Carabao Cup, driving forward and giving the ‘keeper no chance with a thumping strike.

The youngster has been a mainstay in the side, starting the majority of matches in League One.

However, he has failed to have the same impact in the final third in recent weeks, which has coincided with the team’s struggles to find the net.

Another goal did come, though, in the recent 2-1 win at Fleetwood – so hopefully things are turning a corner again.

Do you have any other insight to share on Bradley’s loan so far?

When Bolton confirmed the signing of Bradley, Ian Evatt admitted he was the club’s main target during the January transfer window but the clubs were unable to strike a deal.

This meant that the Whites turned to Fossey instead.

The fact that Wanderers had been keeping tabs on Bradley long before the deal eventually came off highlights their belief that he would be a natural fit for Evatt’s system.

Could you see him fit into the Liverpool squad in the future?

Obviously, there is enormous competition for places at Liverpool and it is a big ask for any youngster to break into the side.

But Bradley has already proven he can handle big occasions, particularly on the international stage with Northern Ireland.

Evatt has hailed his attitude and work ethic, qualities which will serve him well in his long-term ambition of challenging the likes of Trent Alexander-Arnold.

Moreover, Jurgen Klopp has previously spoken highly of the wing-back and the progress he has already made at a young age.

And just briefly on Beck, can you explain the situation and what you expect for the rest of the season?

Beck has had to be patient for opportunities since joining Bolton on loan and only made his first start in the league against Fleetwood on November 19.

His first few weeks at the club were spent building up his sharpness after a difficult loan spell in Portugal with Famalicao.

However, he did feature in several cup ties and came off the bench in the goalless draw against Cambridge earlier this month.

Evatt says Beck has been training well, and the Welshman will be hoping to get more minutes under his belt in the coming weeks and months.

However, there is plenty of competition at left wing-back, with Jack Iredale and Declan John both useful players at this level.

• Many thanks to Dan Barnes for his insight into Bradley and Beck. Follow Dan on Twitter @DanBarnesJourno.