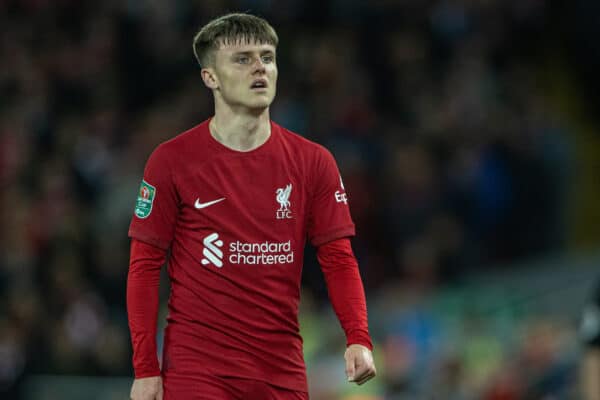 Jurgen Klopp singled 16-year-old winger Ben Doak out for praise following his Liverpool debut against Derby, praising him for having “showed up.”

Klopp made 11 changes to his starting lineup for the Carabao Cup third-round tie at Anfield, including five youngsters making their full debut.

Calvin Ramsay, Stefan Bajcetic, Bobby Clark, Melkamu Frauendorf and Layton Stewart all started for the first time, in a side captained by Joe Gomez with an average age of 21.8 years.

It was perhaps no surprise, then, that Liverpool struggled to put a team from League One to the sword, and it took heroics from Caoimhin Kelleher to seal victory in a penalty shootout.

There were positives throughout, though, not least a fearless cameo from Doak, who played for the senior side for the very first time and impressed from the off.

“That’s Ben,” was Klopp’s reaction during his post-match press conference.

“His instructions were easy: do what you do all the time. He’s really a lively boy, a smart player, good dribbler, fast, can use both legs.

“He’s good! It was nice to watch, eh? It was really nice to watch, him coming in and immediately a lot of things are obviously natural to him, which is really helpful.

“I’m pretty sure his family was here tonight. I can remember when I saw the family at the AXA when we signed the boy, how excited everybody was.

“And now having that night, it’s the next step. It’s cool, he showed up, obviously.”

Klopp could have come in for criticism for the amount of changes he made to his side, omitting almost every key player from the squad entirely, but the manager defended his approach.

In his explanation, he pointed out the virtue of giving those young players a platform to impress.

“We obviously didn’t have a lot of time to prepare the game, but we could at least train once with this team,” he said.

“It’s what I said last year, people always don’t like it when you get knocked out and it’s like ‘ah, very young, you don’t take the competition serious’. It was never true.

“But we have to do things, we have to make sure that we don’t risk anybody. That’s very important.

“And the other thing is we really love to give the boys the opportunity.

“Now imagine, even if we lost the game tonight in the penalty shootout, if the people wouldn’t have seen Stefan, Bobby, Ben, Mel, Layton.

“Then, of course, Fabio is only a little bit older if at all, Calvin of course and then Harvey comes on.

“So it was like eight or nine really young boys and it’s so nice to see them, that you can give them the opportunity just to play real men’s football, against a team who wanted to get through obviously.

“We all know – I’m pretty sure, I didn’t ask anybody – for Derby these games would have been really important money-wise, another round, maybe another Premier League team, and then to get through is just a great experience.”