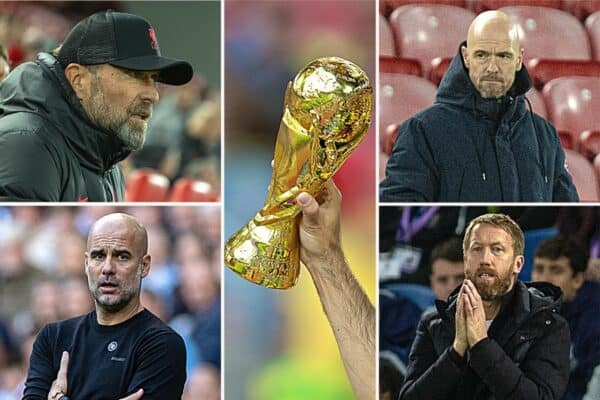 There will be seven Liverpool players involved at the Qatar World Cup, but how does that compare to the Reds’ Premier League rivals?

Saturday’s 3-1 victory over Southampton was the final league game Jurgen Klopp‘s side play before Christmas, with the World Cup due to begin this coming Sunday.

The vast majority of the squads were confirmed last week, with seven Liverpool players set to feature at the tournament.

Alisson and Fabinho will both be involved for Brazil, Trent Alexander-Arnold and Jordan Henderson are in England’s squad, Ibrahima Konate will be with holders France, Virgil van Dijk with Netherlands and Darwin Nunez with Uruguay.

That is less, though, than the rest of Premier League‘s ‘big six’, with Arsenal, Tottenham, Chelsea, Man United and Man City all losing more players to the tournament.

Premier League clubs with most players at World Cup

For City, Erling Haaland, Riyad Mahrez, Sergio Gomez and Stefan Ortega are the only senior players who won’t be involved in Qatar.

That could have ramifications when Liverpool face Pep Guardiola’s side in the Carabao Cup fourth round on Thursday, December 22, with the Reds potentially in a position to name a stronger side than their counterparts, depending on which players play in the latter stages of the tournament.

Edouard Mendy, Thiago Silva, Mason Mount, Raheem Sterling and Kai Havertz are among the 12 Chelsea players who will be involved, while Tottenham and Arsenal will also have key players in Qatar.

Klopp will be hoping those representing the Reds at the World Cup come through unscathed, with their Premier League campaign resuming against Aston Villa on Boxing Day.

The Liverpool players who won’t be at the tournament will take part in a mid-season training camp in Dubai, something Klopp is referring to as another ‘pre-season’, before a vital second period of the campaign.