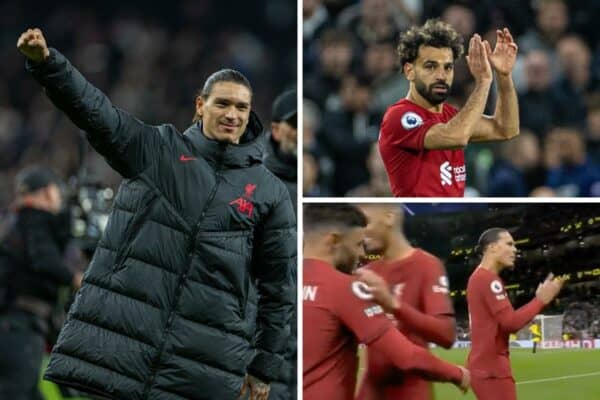 Liverpool needed it, our sanity needed it and both Jurgen Klopp and Darwin Nunez certainly enjoyed the 2-1 win at Tottenham – and who can blame them?

There will have been many that anticipated another misstep from Liverpool over the weekend, especially considering they were playing away from home in the Premier League.

But for the first time since April 30, the Reds were leading at halftime on the road in the league, and while it certainly got nervy at the end, the lead remained intact.

Mohamed Salah‘s double proved enough and three sweet points were added to the tally, just what Liverpool, and we all, needed.

At the end of the match, Klopp dusted off his fist pumps, Darwin Nunez enjoyed his name ringing out from the away end and fans were looking on the bright side.

The usual Nunez chaos shone in all its glory and while he did notch an assist, he was unlucky not to find the net himself.

It’s a pure joy to watch his unpredictable nature and he made sure to lap up his chant after the match, matching his fist pumps in time with his name.

Would you look at that smile…

warra performance from this man <3 pic.twitter.com/yOqBAGEhMk

Look at those fist pumps

It may not have been part of Klopp’s “plan” to see his fist pumps come back, but he “got carried away” as “the people deserved it” – and we’re glad he did.

The view of them from the stands cannot be missed:

It’s been a while, Boss. ?? #LFC pic.twitter.com/7mGxBPgFjl

Klopp fist pumps are back ?? pic.twitter.com/vDRI7oIAQH

The Klopp fist pumps are back ?

More of that again soon, please.

God save the King

After the match, the manager said Salah will be remembered as “one of the best strikers you ever saw,” so we can’t be taking what we’re seeing for granted.

And many will not be – his numbers truly do not lie.

Salah has 10 goals in his last 10 appearances and 17 goal involvements in 18 matches. pic.twitter.com/Tf8EK2whac

Not too shabby considering he’s having a “bad season”?????? pic.twitter.com/xZx2kO3vgT

Superb yet again. 9 goals in his last 9 games ? pic.twitter.com/Z3GPYQGh6g

That takes Mo Salah’s record vs top 6 sides to 44 goals and 14 assists.

Might be our best ‘big game player’ in the Premier League era. pic.twitter.com/p51vVMe7r6

The performance was far from perfect, Liverpool lost control all too easily at the death and never really got it back – they hung on, though, and that has not always been the case this season.

And while you could choose to pick out the negatives, there was optimism around and those at the stadium on Sunday certainly enjoyed themselves!

Massive that win yesterday. Could be one we’re looking back at the end of the season as pivotal.

Eighth, and seven points behind Spurs in fourth (with a game in hand) isn’t great obviously but it’s a damn sight better than 11th and a 13-point gap if The Reds had lost again.

Alisson Becker is the greatest goalie on the planet and that ground’s overrated pic.twitter.com/Hl7Yz1DCKO

Spurs(a) what a win redmen best I’ve seen us play all season ?? pic.twitter.com/3yF4mURvLx

Haha…yes the reds!!
Bloody hard second half that ?
3 points though folks ??? pic.twitter.com/l3pZMD91Yx