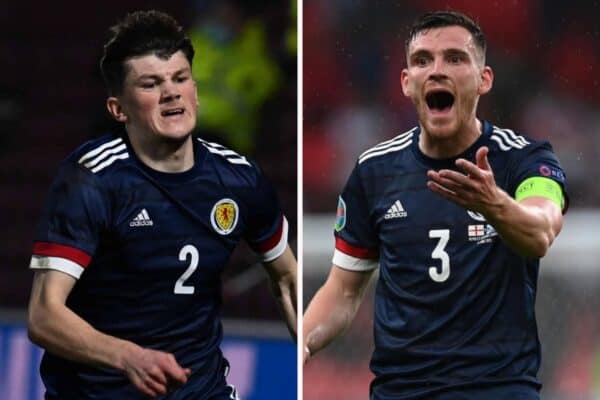 There was a strong Liverpool connection running through Scotland’s mid-season friendly with Turkiye, which brought Calvin Ramsay‘s senior debut.

Though the domestic season has been paused, and Scotland are not in the World Cup, there was still a friendly to play in Diyarbakir on Wednesday night.

Andy Robertson captained his country as a left wing-back, while Ramsay was named on the bench after receiving his first call-up, leaving the under-21s ranks.

Turkiye were the dominant side from the off, with Craig Gordon denying Hakan Calhanoglu and Robertson pulling off a late block to thwart Cengiz Under.

But there was nothing Gordon could do to keep out Turkiye’s opener, headed in powerfully by former Liverpool loanee Ozan Kabak.

Kabak, who joined Hoffenheim from Schalke in the summer after temporary spells with Liverpool and Norwich, celebrated a first-ever goal for his country.

Ramsay replaced Ryan Fraser at half-time, taking his place on the opposite wing to Robertson, but the hosts made it 2-0 shortly after, with a smart finish from Under on the break.

There were bright moments from Scotland, however, and not least from John McGinn, who collected Robertson’s pass on the left, driving forward 60 yards and firing into the far corner for 2-1.

It wasn’t to be for Steve Clarke’s side, though, who suffered defeat in their final game of 2022.

Robertson and Ramsay will now take a deserved break before starting preparations for the second half of the season, joining Liverpool in Dubai in just over two weeks’ time.

?? Stefan Bajcetic started and played just over an hour as the Spain U19s beat Saudi Arabia 7-0 this evening.

His debut at U19 level. Japan up next on Saturday. pic.twitter.com/Yihny4DOgA

Elsewhere on Wednesday, there was a debut for Stefan Bajcetic with the Spain under-19s, as the 18-year-old started and played 61 minutes in a 7-0 thrashing of Saudi Arabia.

Bajcetic started in his now-natural midfield role, departing the field with the score at 4-0, ahead of another friendly against Japan on Saturday.

Thursday will bring more action for Liverpool’s internationals, with Caoimhin Kelleher, Ben Doak and Mateusz Musialowski all set to be involved.