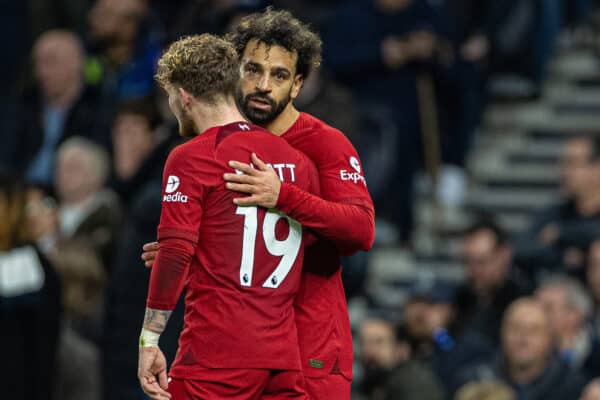 Liverpool finally recorded an away win in the Premier League as the defence just about stood up to a second-half barrage to win 2-1 at Tottenham.

Did we…did we start well?!

It gets to a point, covering Liverpool of late, where you’re playing opposition lineup bingo: who will score first against us today?

Yet in a sodden north London, it was the Reds who came out of the traps quickest, pinging passes about as though we hadn’t been troubled by the likes of Steve Cook and Liam Cooper recently.

Darwin Nunez had already rattled off two attempts before he set up Mo Salah for a lovely finish and a rare Liverpool lead early on in a game – a lead (and passage of play) which had the capacity to quickly rekindle hope that maybe, just maybe, the season wasn’t going to end up the massive dumpster fire it has threatened to be for several months.

It’s notable that after a month or so of swapping formations like a frustrated teen in a new career on Championship Manager, Jurgen Klopp has settled back on the ‘old’ 4-3-3 for successive games against big opponents.

It might well be that what the boss described as having gone “stale” not too long ago remains his best bet to get back to being relentless off the ball and more consistent on it, despite the gaps and ghosts occupying the middle of the pitch earlier this season.

There were periods when the first half reminded us of what we used to watch on a regular basis, but the second was much more like what we saw across August and September in certain spells.

Salah’s actions speak just as loud as his words

Mo was one of our better performers in the spell of the season we’ll refer to as the four-man midfield month, encompassing 4-4-2 and the diamond.

Even so, and with the goals he got from being in a two-man attack, he did make reference to preferring the 4-3-3 and his usual right-sided role.

Small wonder, then, that he impressed again in buildup play and with his finishing when restored to that flank in Premier League play.

Salah has been a regular Golden Boot winner or contender, though wasn’t even in the top 10 ahead of this weekend’s games due to the Reds’ inconsistent showings.

Two more takes his tally to six for the league campaign (joint-top for us with Roberto Firmino now) and to 14 in all competitions, highlighting how he remains the man we must make the most of when it comes to deciding exactly which tactical approach, more than just formation, to employ on a regular basis.

Why no response from the touchline?

Perhaps Klopp will say he trusted the players out there, or maybe that those on the bench were not fit, not fully ready for a game of such magnitude and the context of the last 20 minutes.

Maybe he just knew the type of performance Jordan Henderson was about to produce as sub.

But the question still needs asking and addressing: Spurs dominated from the restart, so why did we go half an hour of letting the team struggle with no real reaction from the sideline, no real aid provided when certain individuals were struggling?

For what it’s worth, the two who went off on 73 minutes – Harvey Elliott and Firmino – were the right two. The former had faded, the latter didn’t really get started that much anyway.

But it could have happened 15 or 20 minutes earlier and perhaps the tale of the game may have been rather different in that testing, tricky period.

Fair play for reacting later on, though, and withdrawing anybody who looked in danger of crossing the halfway line, with Alex Oxlade-Chamberlain‘s few minutes a welcome return and Joe Gomez also coming on as we finished in more or less a 6-3-1-0 shape.

Actually good? Better than previously? Still miles off it?

It feels a little tough to come to a consensus on our Brazilian defensive midfielder for this match, who played a very central role to proceedings given how much work we had to do second half.

In terms of defensive basics, we’ll definitely point out that Fabinho made a bunch of toe-ins, hooks clear, wallops into the night sky (yes, it was night-time by 5pm in the dark and rain) and a few headers. These were all important.

But it wasn’t elite. It wasn’t effortless. It certainly wasn’t anything approaching his best.

Baby steps, like the Reds’ form: we’ll take any improvement and hope it’s a sign of a better 2023, because there were still instances where Fab tried to press and tackle higher in midfield and looked akin to a submarine trying to chase a dolphin round the bend of a river.

Two to go before the great reset

One meaningful match and a first defence of one of our cups – that’s all that now remains before the winter break for a much-maligned World Cup.

The Reds face Derby in midweek which, given injuries, form and priorities elsewhere, is now quite the curiosity at least, before we then face Southampton in our last Premier League game.

That one’s at home and they may well have a new manager in place by then; if we win and results go in a reasonable fashion elsewhere, we could at least be back in European places when the league takes its leave.

Albeit not a European place we actually want to finish in, obviously.

It’s appalling we’ve had to wait until November for a first away league win of the campaign. It’s worse that we’re at this time of year and still don’t have three consecutive league wins.

But as was the case with a win over Napoli in a mostly irrelevant game, you take what you can right now and hope it leads to improvement, confidence, consistency.

There were aspects of even the dismal second half which allude to that – most of all the rock-steady defensive pairing of Virgil van Dijk and Ibrahima Konate – and perhaps a few players back to full fitness along the way will be the next-level booster we need.

Finish with four straight wins across all competitions and maybe we can look forward with cautious optimism.