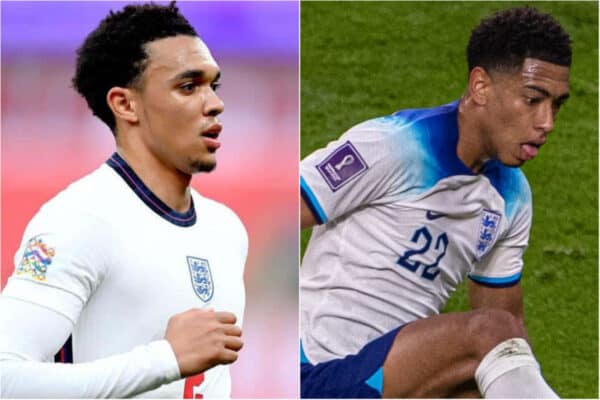 Rounding up the latest World Cup news, and more, from a Liverpool FC perspective.

The first full day of action saw both home nations in action in Group B and Virgil van Dijk keep a clean sheet.

A 6-2 victory for the Three Lions was somewhat more eventful than the usual opening game at a major tournament for England.

Some of the attacking play was excellent; some of the defensive work left much to be desired, as could probably have been predicted given the names involved.

Neither Red in the England squad featured, but Virgil van Dijk skippered the Dutch team to victory, while former Reds Harry Wilson and Neco Williams both started for Wales.

One of the biggest, and frankly weirdest, talking points from the early games has been how much added time has been played – more than 25 all told in England vs Iran, then another eight at the end of USA vs Wales.

Trent Alexander-Arnold might not have got onto the pitch in England’s first group game at the World Cup, but he did hit the mark all the same.

That came in comments aimed at Gary Neville, who had suggested Trent couldn’t be trusted in knock-out games.

Our No. 66 rightly pointed out he hasn’t done too badly in knock-out fixtures so far in his career – considering he has already been to three Champions League finals, it speaks volumes as to how he copes with that type of pressure and occasion.

Elsewhere, Jude Bellingham was in the England side and scored the opener.

Having been relentlessly linked with the Reds, allied to talk over a January move for a midfielder, it’s easy to see why Liverpool fans have been quick to dream big and think he could make the move from the Bundesliga to Anfield sooner or later.

One which might have escaped Liverpool fans’ attention if they didn’t tune in to the England game would be the significant moment of Iran’s players remaining silent during the national anthem.

This is the players embarking on their own mission of solidarity towards women in their home country, and specifically against the government who are not doing enough to protect them against abuse and violence.

At a World Cup when so many messages of inclusivity are being absurdly shut down, players railing against authorities in such a notable way is worthy of praise.

Reports have suggested that TV feeds back in Iran did not show the players remaining silent throughout.

From an LFC perspective, keep an eye on Ibrahima Konate‘s name on the teamsheet – the talk is that he’ll start the reigning champions’ World Cup opener at the heart of defence. It would cap a rapid rise for the young defender, who has been excellent this season when available.

Elsewhere, Matty Cash (Poland) and Emi Martinez (Argentina) should be in action – they play for Aston Villa domestically, who are Liverpool’s first Premier League opponents back after Christmas.