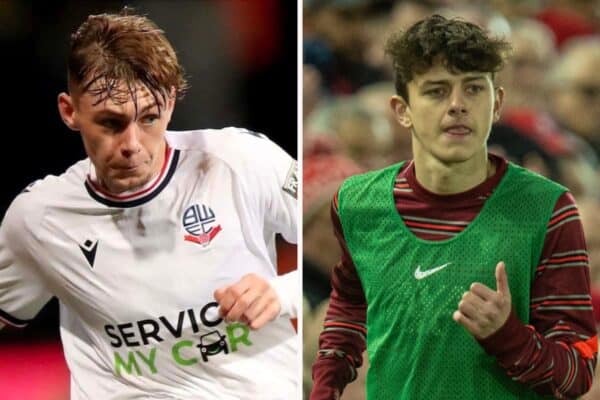 Left-back Owen Beck finally saw the wait for his first league start of the season come to an end, with Conor Bradley‘s goal helping to make sure it ended on a winning note.

After a standout season last year, 2022/23 was tipped as a chance for Beck to play more consistently in a first-team environment.

It has not yet played out that way after swapping a loan move at Famalicao for Bolton, but he made a welcome step on Saturday by being named in a league XI for the first time this season.

The 20-year-old started at left-wing back, on the opposite flank to Bradley, and played 80 minutes – with his game given the chance to get off to the perfect start, only to fire agonisingly wide from a rebound.

The Manchester Evening News‘ John McDougall gave Beck a rating of 6.5/10 after Bolton’s dramatic late 2-1 win over Fleetwood, saying that he “struggled at times defensively” but “grew in influence and confidence.”

Beck was substituted with Bolton 1-0 down, but five minutes later Bradley‘s name was on the scoresheet for the fourth time this season after smartly moving to the goalline for a tap-in.

The close-range finish takes his goal contributions to eight this season (four goals and four assists) and allowed his side to push for the winner, which they got in the 90+5th minute thanks to Dapo Afolayan.

The victory pushed Bolton up to fifth place in League One, and hopefully also hands Beck a needed confidence boost to kick on and add more starts to his name.

Elsewhere, Fidel O’Rourke etched his name on the scoresheet once more for Caernarfon Town, scoring the opener in a frantic 3-3 draw against Connah’s Quay.

The 20-year-old was alive to the ball at the back post, heading the ball past the goalkeeper for his seventh of the season in 13 appearances.

It was the first of three goals for Caernarfon in 63 minutes but the victory was snatched away by three Connah’s Quay goals in the last 26 minutes of the match.

Marcelo Pitaluga‘s season with Macclesfield, meanwhile, continued with a dramatic 4-3 victory over Mossley, thanks to three goals in the last five minutes for his side.

The Brazilian had a busy afternoon and his side’s victory keeps the Silkmen four points clear of Leek Town at the top of the West Division of the Northern Premier League.