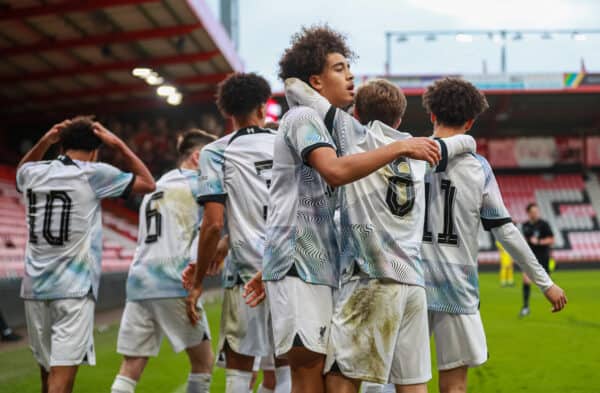 On the same day Liverpool’s first team return to competitive action, the Reds’ under-18s beat Bournemouth 2-1 at the Vitality Stadium.

The squad selected for the game confirmed that the trio of Stefan Bajcetic, Bobby Clark and Ben Doak are all with the first team for Thursday’s meeting with Man City.

After two big missed chances in the early stages, Jayden Danns made it third time lucky to put the Reds in front after 38 minutes.

Tommy Pilling’s shot from long range was blocked before the ball fell to Danns, who had the simple task of firing home from close range for his second goal at U18s level this season.

The Reds made one change at the break, with 15-year-old Egyptian Kareem Ahmed coming on for his U18s debut, and it would turn out to be a memorable afternoon for the schoolboy.

With just over 10 minutes of normal time remaining, Ahmed, who is part of the Egyptian youth set up, made it two when the ball fell to him fortuitously inside the box.

Ranel Young had a big chance to make it three soon after, but it was Bournemouth who scored the third goal of the game, with Finn Tonks scoring a consolation deep into stoppage time.

The victory means Liverpool have now set up a fourth-round tie away to Port Vale, who have beaten Chesterfield, Salford City and Hull City in this season’s competition so far.