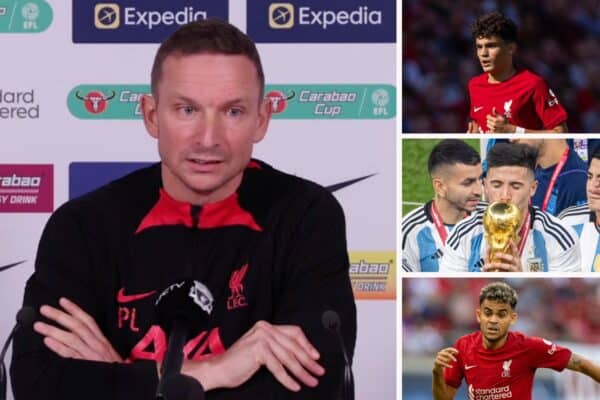 Pep Lijnders was on media duty ahead of Liverpool’s return to action against Man City and he had plenty to say on the squad, a certain Enzo Fernandez and the club’s exciting youngsters.

Here are five key points from the assistant manager ahead of Thursday’s game:

With the January window fast approaching, Liverpool’s potential business, or lack thereof, is on the minds of many.

Lijnders was resistant to make a comment on the matter but did repeat the mantra that we have often heard from Jurgen Klopp when it comes to transfers.

“This is the press room, not the board room – we discuss these things in the board room,” Lijnders said. “Next time when Jurgen sits here, ask him, he will be open.

Curtis Jones was with the squad in Dubai but did not play a single minute in either of the friendly matches, continuing his absence after missing two games before the break.

But he is now “one week away from team training,” Lijnders confirmed, while Kaide Gordon continues to make strides forward having started running while in Dubai.

“It’s great to see him on the pitch [and] just to tell him as well that we didn’t forget him,” Lijnders said of 18-year-old Gordon.

Links with World Cup winner Enzo Fernandez continue to persist and during an impassioned discussion regarding the competition and Argentina, Lijnders namechecked the midfielder.

“What I liked about Argentina is they played to their strengths,” he said.

“Enzo and Mac Allister, how they manage the midfield, together with Rodrigo but especially these two, how they balance each other.

“He [Messi] was the start of many attacks – with Enzo, of course. Again, they [Argentina] grew in the tournament.”

That was two mentions for Fernandez. Insert eye emojis here?

Stefan Bajcetic, Bobby Clark and Bobby Doak are all in contention to feature on Thursday and Lijnders couldn’t hide his joy when discussing their talent.

“Age is just a number, we still believe we need to give our talents chances because we believe in them,” he said.

“Yesterday I walk off the pitch with Jurgen, the session was insane, and he whispers, ‘wow, Stefan and Bobby Clark, they play so mature, they play like they are 25.’

“I say, ‘and Ben Doak, could you imagine if he was a signing doing what he’s doing in this session’.

“We are just really happy with three young signings!”

The academy is certainly prospering!

On the fan issues

In the build-up the game there has been a lot of focus on eliminating the unsavoury behaviour among fans, with CEOs of both clubs even writing a joint letter on the issue.

And Lijnders knows a rivalry is born out of the importance of the games but welcomed the cooperation between Liverpool and City in making a statement to keep it respectful.

“Let me first say positive both clubs cooperating, made a good statement, very clear… The only reason it is a rivalry is that it matters,” Lijnders said.

“We know playing against City has this importance. With rivalry comes emotion, that’s good – we need emotion from the stands, from the players – we need these emotions.

“The only problem with emotion is that without respect it becomes harmful.

“I really think it’s positive both clubs are cooperating… it’s not specific to a club, it’s a football problem.”