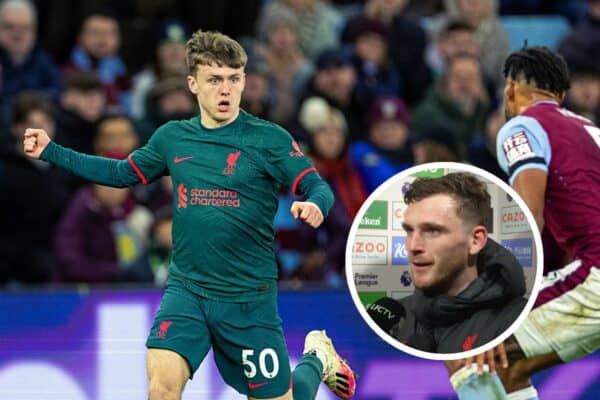 Ben Doak made his Premier League debut at Aston Villa and Andy Robertson was “buzzing” for his fellow Scot, who plays with “no fear”, irrespective of the opposition.

Lucas Digne certainly knows about the lack of fear after the 17-year-old wasted no time in leaving the full-back in his wake, much to the delight of Liverpool’s bench.

They were not the only ones watching on in admiration as Robertson was also keeping an eye on Doak, who he admitted he has an obvious “soft spot for.”

It was Doak’s second appearance and his fourth senior game in a row in the matchday squad, another nod to his quality at such a young age that fits into Jurgen Klopp‘s belief that if you’re good enough, you’re old enough.

And the teenager is certainly keeping Klopp’s senior squad on their toes in training, not afraid to take them on and it is translating into the chances he has been given in senior matches.

“Young Ben, I’ve got a soft spot for him, for obvious reasons,” Robertson told LFCTV. “When he came on I was just buzzing for him, you know, such a young age.

“He’s been unbelievable since he came into the squad, no fear, trying to dribble past us, keeping us young and you saw that.

“Fair play to all the young lads, they all step up and we’ve got some brilliant ones around us and it’s important we try and help them.

“They’re the future. They both [Bajcetic and Doak] showed our future is pretty bright.”

That it is, Robbo.

Robertson has clearly taken Doak under his wing since the youngster’s move in the summer, with the two readily seen together when the 17-year-old is in senior training.

For Doak, to have his national captain by his side will be invaluable as he looks to continue the upward trajectory that had Liverpool poaching him from Celtic in the first place.