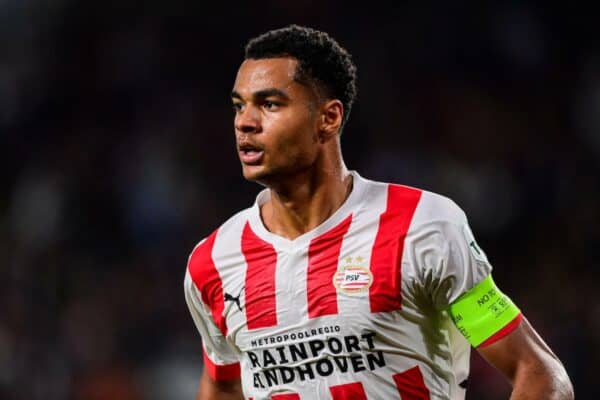 Cody Gakpo would be eligible for Premier League trip to Brentford

Liverpool are in the final stages of finalising the deal for Dutch winger Cody Gakpo, who would be eligible to feature at Brentford on January 2.

That is according to the reliable Paul Joyce, from the Times, who states “Gakpo would be eligible for the Premier League trip to Brentford next Monday.”

There have been question marks over if it would be possible considering Monday, January 2, is a public holiday and the need for the FA to rubber stamp the deal before he has the right to feature.

But it appears it will be possible for Jurgen Klopp to name Gakpo in his squad should all the formalities be completed as expected ahead of the transfer window opening on January 1.

Gakpo is to undergo his medical imminently ahead of his £37 million move from PSV, but just because he will be eligible at Brentford does not mean he will take any part.

The FA Cup clash against Wolves on January 7 at Anfield may be a more realistic target for the 23-year-old, who enjoyed time off after his involvement in the World Cup for the Netherlands.

With little time between hosting Leicester on Friday and travelling to Brentford on Monday, there are limited opportunities to get Gakpo up to speed with the information he will need to know.

Liverpool’s last January transfer, Luis Diaz, for reference, made his debut off the bench one week after his arrival against Cardiff in the FA Cup.

It came naturally to Diaz to slot into the team and the hope will be Gakpo can enjoy a similar transition at Anfield.

As for his Champions League eligibility, clubs can register a maximum of three new players after the January window, irrespective of if they have played for another club in the competition this season.

There will need to be a reshuffle of the squad to cater for a non-homegrown player but injuries could dictate who is in and out.