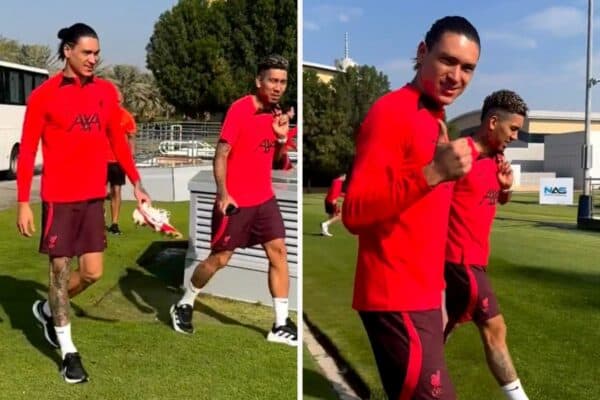 After 10 days off following Uruguay’s elimination from the World Cup, Darwin Nunez has now reconvened with the Liverpool squad as they enter their second week in Dubai.

Nunez will have been bitterly disappointed when Uruguay failed to make it through the group stages despite winning their final match against Ghana.

The Liverpool forward started all three of his side’s matches in Qatar but struggled to make an impact in a Uruguay team that must now gradually phase out the likes of Luis Suarez and Edinson Cavani.

Now, though, his attentions will turn back to club duties, as he becomes the first Liverpool player involved at the World Cup to reconvene with his team-mates.

Nunez is believed to have arrived in Dubai on Monday, with Liverpool sharing footage of him arriving at training alongside Roberto Firmino on Tuesday.

After initial fitness assessments which will hopefully be a formality, Nunez should be involved in full training this week, and could feature in Friday’s friendly against AC Milan.

His early return will also mean that he is available when Liverpool get back to competitive action in their Carabao Cup tie against Man City next Thursday, December 22.

Alisson, Fabinho, Virgil van Dijk, Trent Alexander-Arnold and Jordan Henderson, the five Liverpool players who crashed out of the World Cup at the quarter-final stage, will not join up with the team in Dubai this week, having been granted time off.

Instead, they are expected to return to training back on Merseyside next week, which should give them a chance of featuring against City.

Nunez’s early return is a welcome boost for Klopp, even more so after Luis Diaz‘s injury setback, which is expected to keep him out of action for a further three months.

The Colombian was pictured alongside his family in hospital over the weekend, with reports in Colombia suggesting he underwent surgery to repair the damage on his lateral collateral ligament on Saturday.