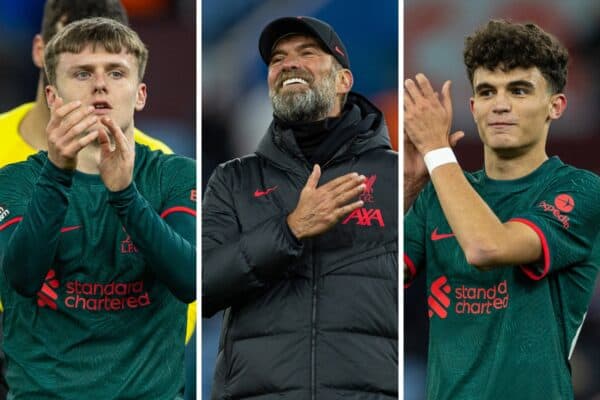 Liverpool had one last present to deliver, scoring three goals against Aston Villa to win three league games in a row for the first time this season.

It ’twas the day after Christmas and Jurgen Klopp‘s side delivered the goods at Villa Park thanks to goals from Mohamed Salah, Virgil van Dijk and Stefan Bajcetic.

The first came from a sumptuous move between Trent Alexander-Arnold and Andy Robertson, with two first-time deliveries matched by a poised finish from the No. 11.

Cue a very happy Salah as he moved equal seventh in Liverpool’s goalscoring charts alongside Kenny Dalglish with 172 strikes.

It was then Van Dijk’s turn to celebrate thanks to another instinctive hit, marking his comeback in style and making Liverpool’s first-half dominance reflect on the scoreboard.

It wasn’t as straightforward in the second as Villa pegged back a goal, but the Reds did not crumble and the buffer was restored from an unsuspecting source.

Eighteen-year-old Bajcetic showed brilliant composure only moments after his introduction to make it 3-1 with his first senior goal.

What a moment for the youngster.

The feel-good factor did not stop there as 17-year-old Ben Doak was introduced late on for his Premier League debut, and he took the game on at every chance.

In Klopp’s words, the “future is bright.”

The full-time whistle came and so did the celebrations, Klopp and his players going over to the travelling Kop to show their appreciation. We love to see it.

A valuable three points indeed. Now to collect the same haul on Friday against Leicester, in the final game of 2022.