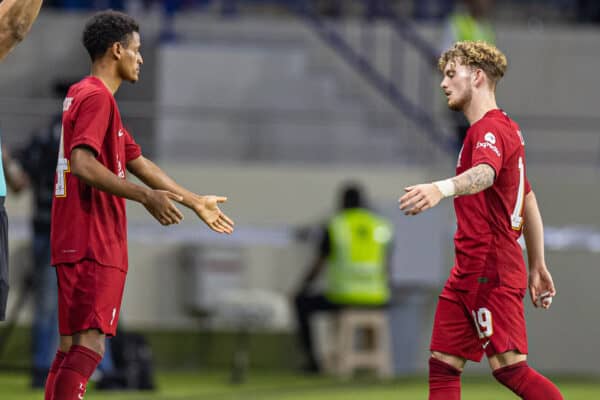 Liverpool have avoided another injury blow after Harvey Elliott‘s early withdrawal against Lyon, but another midfielder is yet to return to training.

Elliott was taken off before the half-hour mark in Sunday’s 3-1 defeat to Lyon in Dubai, with the teenager shaking his head as he left the pitch.

After the game, Jurgen Klopp told reporters that “he looks fine now but he feels it,” before outlining the hope that “we were lucky” when it came to any lasting injury.

There remained concerns, though, until the squad returned to training this week, with Elliott part of sessions on both Tuesday and Wednesday.

The youngster was involved in ball work on both days, suggesting that he is fully fit and in contention for the friendly against AC Milan later this week.

However, absent from the squad put through their paces by head of fitness and conditioning Andreas Kornmayer – and, during rondos, a vocal Andy Robertson – was Curtis Jones.

Jones has not been part of full training since Liverpool arrived in Dubai last week, with the 21-year-old still suffering from the fitness issue that kept him out of the final game before the World Cup.

Having been involved on Tuesday, there was no sign of Calvin Ramsay the following day either.

There is every chance the right-back’s fitness is still being managed after a disrupted start to his life at Liverpool, though he could be a doubt for Friday.

Chief executive Billy Hogan, who has assumed the day-to-day duties of Fenway Sports Group president Mike Gordon amid negotiations over the club’s future, was also present at training.

The American was seen in talks with Klopp on the touchline, on a day that also saw Jordan Henderson visit during his time off after the World Cup.

There were no other absentees from Wednesday’s session beyond those already out, with Diogo Jota, Arthur, Kaide Gordon and loanee Marcelo Pitaluga still undergoing rehabilitation.

Luis Diaz, meanwhile, is back on Merseyside having required surgery to repair lateral collateral ligament damage in his left knee.