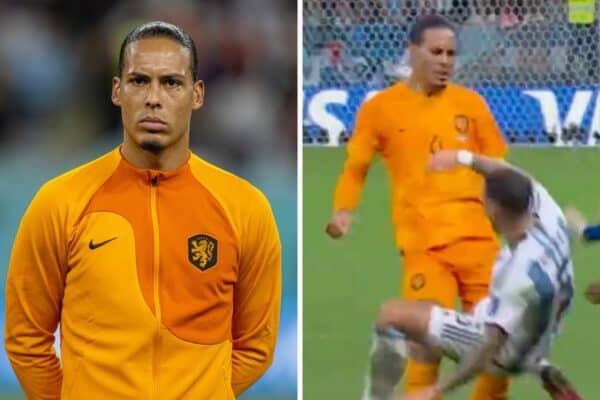 Virgil van Dijk‘s World Cup came to an end with a penalty shootout defeat to Argentina in the quarter-finals on Friday, but that was only part of the story.

With less than 10 minutes of the game to go, the Oranje looked dead and buried with Argentina two goals in front, before a dramatic late brace from substitute Wout Weghorst took the game to extra-time.

Tempers flared before the equaliser, when Argentina’s Leandro Paredes fired the ball towards the Netherlands bench. Van Dijk was first across to confront the Juventus midfielder, sending him flying up in the air before a scuffle between both sets of players.

Virgil van Dijk knocks Leandro Paredes to the floor after the Argentina midfielder kicked the ball at the Netherlands bench. Great photo by Matthias Hangst. pic.twitter.com/7bHRMoe1FK

That made the Netherlands’ equaliser all the sweeter, with Van Dijk embracing the wild celebrations that followed.

Hang it in the Louvre. pic.twitter.com/ho60QviJ6m

Eventually, though, it wasn’t to be for Liverpool’s No. 4, who missed the first penalty of the shootout, with Argentina setting up a meeting with Croatia in the semi-finals.

After the game, Van Dijk was asked if he thought Argentina would go on to win the tournament, to which he replied “I don’t care, I won’t watch anymore.”

There has also been a suggestion that Van Dijk’s clearance that would eventually result in Argentina’s penalty, did not go out of play. We’ll let you decide!

A devastating end to his time to Qatar, but Van Dijk could hold his head high, having captained his country to the quarter-finals at his very first World Cup.

His focus will shortly turn to reconvening with the rest of his Liverpool team-mates for the second half of the season, but not before a well earned holiday.

Van Dijk was one of three Reds to crash out of the World Cup on Friday, after Alisson and Fabinho also suffered penalty heartache for Brazil against Croatia.

It remains to be seen when they will return to action, but given Darwin Nunez was granted a week off after Uruguay were knocked out, it seems unlikely they will take part in any of the training camp in Dubai.

They should, however, be in with a chance of featuring against Man City in the Carabao Cup on December 22, and certainly for Liverpool’s next Premier League match against Aston Villa on Boxing Day.