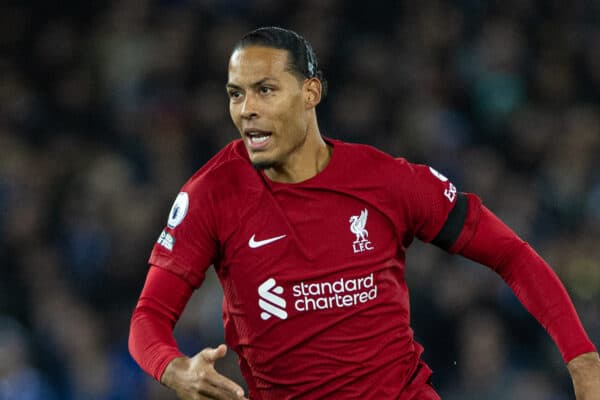 “It wasn’t good enough, and we all know that” – Virgil van Dijk

There was no overlooking the lack of quality on show from Liverpool in the win over Leicester, with Virgil van Dijk quick to say “it wasn’t good enough.”

For the sixth league game in a row, there would be no clean sheet for the Reds as Leicester sliced the team open after just four minutes.

A lack of intensity, the midfield’s inability to assert any control and too many players off their best had Liverpool chasing the game and, thankfully, for them, luck was on their side.

Two own goals from Wout Faes in the space of seven first-half minutes gave the Reds an undeserved lead, which they held on to for a fourth league win in a row.

The victory did not have Van Dijk glossing over the performance, but there’s no hesitation in taking the three points and shifting the focus to Brentford on Monday.

“At times? We were very poor today but it’s just good to get the three points, very important to win these type of games, that’s the positive,” the No. 4 told Sky Sports.

“Now we have to recover, improve and prepare for Brentford.

“We tried to get in the game, it wasn’t good enough and we all know that. There are plenty of things we have to improve.

“It’s difficult for me to say at the moment [about being easily run at], we know they have quality and speed up front, and a couple of times they had dangerous moments or offside, that’s their game plan.

“But job done, let’s keep it that way.

“At times we were maybe too quick and then we lose the ball and it’s a bit too open, and they can play, but we have to take the three points and on to the next one.”

The next one is only three days away, a possible first opportunity to see January signing Cody Gakpo if his paperwork is rubber-stamped in time.

“Hopefully a lot,” Van Dijk said of what to expect from Gakpo. “A good player, good boy.