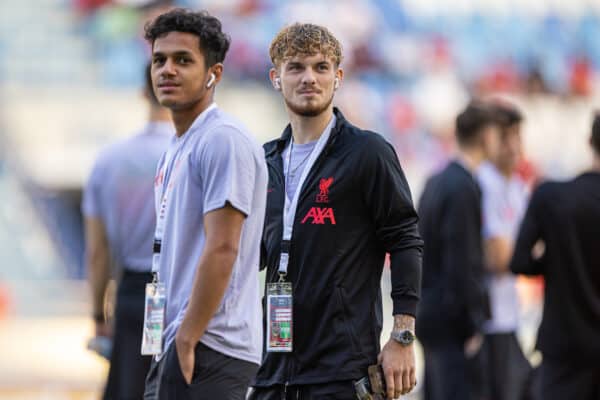 Jurgen Klopp has provided a hopeful update on Harvey Elliott‘s fitness, after the youngster was forced into an early exit in Sunday’s friendly against Lyon.

Elliott was among a strong starting lineup at the Al-Maktoum Stadium on Sunday, but was forced off before half-time as Melkamu Frauendorf took his place.

The teenager shook his head as he exited the field, raising concerns over a fitness issue for the only player to feature in every game for Liverpool this season.

But speaking to journalists after the 3-1 defeat to Lyon, Klopp explained that the belief is “we were lucky” when it comes to any injury.

Klopp revealed that Elliott “feels fine,” though there should remain concerns until a proper diagnosis is made, as similar situations have unfolded in the past before injuries are then confirmed.

The hope, of course, will be that the No. 19 is passed fit and can continue training in Dubai ahead of the season’s restart at Man City on December 22.

Liverpool are already without Luis Diaz and Diogo Jota, along with loanee Arthur, while Virgil van Dijk, Jordan Henderson, Trent Alexander-Arnold, Fabinho and Alisson are all on holiday following their exit from the World Cup.

Ibrahima Konate, meanwhile, is still involved in Qatar after France’s 2-1 win over England in the quarter-finals.

The manager did explain, however, that Darwin Nunez would rejoin his team-mates for the first time on Monday, after Uruguay’s exit from the tournament.

Elliott has made 22 appearances so far this season, including 14 starts, with only five outfielders clocking more minutes on the pitch for Liverpool so far.