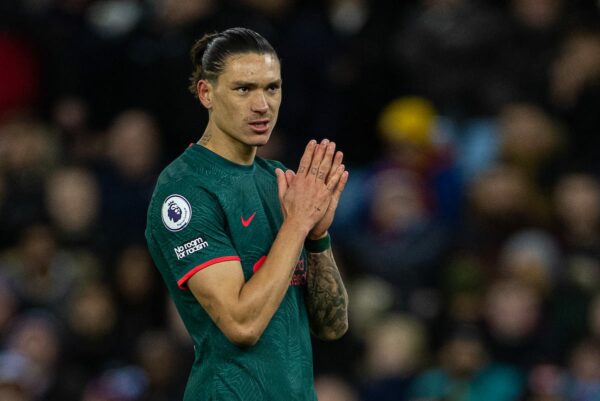 Jurgen Klopp has “no doubt” that Darwin Nunez will find his goalscoring boots after letting a number of opportunities pass him by in the 3-1 win over Aston Villa.

Nunez mightn’t have scored at Aston Villa but he was named Amazon’s Man of the Match and received a standing ovation from the travelling Reds, having created plenty of openings for Liverpool.

The No. 27 had six shots in total, he helped set up Stefan Bajcetic‘s first senior goal – Liverpool’s third of the day – and consistently stretched Villa’s defence.

He has a prolificacy of wandering offside and pulling his shots wide, but that he finds himself in dangerous positions is half the battle, now fans just have to wait for the clinical edge to come.

And Klopp knows that will come on a consistent basis.

“It was an incredible game he played,” the manager told Amazon Prime of his striker, who has nine goals this season.

“And then life is unfair. He will score goals, I have no doubt about that. What he gives us is this depth, each ball you can control once and then play it in behind.

“That’s really tricky because he has power that is incredible. Of course, he will score.

“I was in this situation very often with strikers and everything will be fine. This game was exceptional.”

While his finishing still leaves plenty to be desired, Nunez is a constant menace for the opposition and he helps makes things happen, an unpredictable spark that Liverpool need.

When it all clicks into place for him, it will be devastating for the opposition but there’s work to be done to get there.