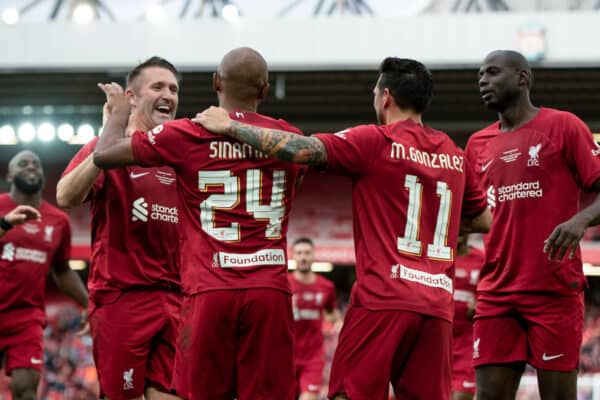 Liverpool Legends will take on a Celtic Legends side in a charity match at Anfield next year.

The match will take place on Saturday, March 25, will be managed and hosted by LFC Foundation – in association with Forever Reds – and Celtic FC Foundation will provide the opposition.

The previous six LFC Foundation Official Legends Charity Matches held at Anfield have raised a total of £5 million for the Reds’ charity and its partners.

Chief executive of LFC Foundation, Matt Parish said: “We are pleased to announce our seventh home Official Legends Charity Match against Celtic Legends next year and we are very much looking forward to welcoming the LFC family to Anfield for a fun-filled afternoon.

“I’m always overwhelmed by the support and generosity we receive that enables us to support more children, young people, and families in underserved communities across the Liverpool City Region and beyond thorough our programmes and our charity partners.

“Both clubs have a shared history and I’ve no doubt that the Legends will put on a fantastic and competitive display of football for all to enjoy.”

Celtic FC Foundation chief executive, Tony Hamilton said: “It’s an honour for us to work with Matt and his team at Liverpool FC Foundation on this charity match as we celebrate a wonderful relationship between the two clubs.

“We are very grateful to be confirmed as one of the beneficiaries of the match proceeds as this will make a huge difference to our work challenging poverty and promoting inclusion.

“And we look forward to bringing together a host of Celtic favourites to take on their Liverpool counterparts on March 25, in what I’m sure will not only be a wonderful spectacle but also a hugely heart-warming occasion filled with special memories.”

All the match proceeds have been committed to good causes and beneficiaries will include Celtic FC Foundation, Forever Reds (the official LFC former players association which, among other things, provides support to the club’s former players in need of care) and a range of programmes delivered by LFC Foundation and their partner organisations including schools, inclusive sports, social action, health and wellbeing and food poverty.