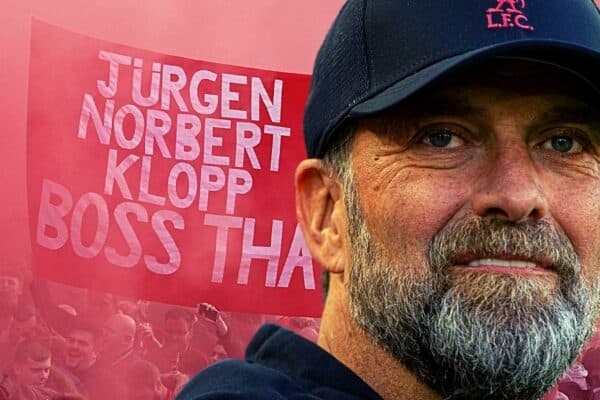 Liverpool FC have a lure that no other club can offer – for both potential new owners and new signings, writes Chris McLoughlin.

IMAGINE for just a minute that Jurgen Klopp hadn’t extended his contract last season to remain as Liverpool manager until 2026.

And then imagine how things would have been perceived after the Reds started the season with only six wins from their opening 14 Premier League games amidst a flurry of statistics showing they’ve run less than their opponents.

The narrative has been about a lack of intensity. That certain players’ legs have gone. That others have been saving themselves for the World Cup.

That an ageing team can’t go again after a 63-game season. That Liverpool didn’t do enough in the transfer market. That Sadio Mane’s departure was the bulb on the Christmas tree going out that stopped the others from flashing.

Perhaps there’s an element of truth to all of the above. Maybe some of those factors are over-analysed red herrings. But I’ll guarantee you this. If Jurgen Klopp was leaving Liverpool FC in 2024, as was his initial plan, the narrative would be meandering down that particular route when playing the blame game.

Questions like: Did Michael Edwards leave because he knew Klopp was going in 2024? Is it an excuse for the owners not to spend big money on younger players because nobody knows if the new manager will want them? Are some players losing their intensity because they assume he’ll stick with them for another 18 months as it’ll be a different manager rebuilding LFC?

But Klopp extending his stay until 2026 put the kibosh on such speculation before it even started, thus leading us all down other avenues when analysing why Liverpool weren’t at their best before the World Cup with ‘it’s cos Pep Lijnders did a book’ being the 2022/23 version of 2020/21’s ‘it’s cos they moved from Melwood to Kirkby’.

Klopp signing that contract extension has also provided much-needed stability at a time when anything from a full change of ownership to the arrival of new investors is on the horizon. If FSG do sell Liverpool lock, stock and oil barrel, the value of still having Klopp in charge for another three-and-a-half seasons cannot be underestimated.

New owners always have their own ideas on how to do things, particularly on player recruitment. In the last 10 years we’ve gone from Damien Comolli pulling the strings, to a dysfunctional transfer committee, to Klopp getting ‘the first and last word’ on transfers. And by that I mean deciding on wanting or not wanting a player rather than deciding whether to pay their transfer fee and wages.

Any new owner must – and would be bonkers not to – respect the way Klopp works on recruitment. And with three-and-a-half seasons left on his contract instead of 18 months he has the time to spend whatever new investment is (hopefully) ploughed into LFC to try to build a second great team ala Bill Shankly in the 1970s.

As far as I’m concerned, that process began with the arrivals of Ibrahima Konate and Luis Diaz last season followed by Darwin Nunez and Fabio Carvalho in the summer. Now it needs to be accelerated.

Agents Henderson and Alexander-Arnold have been doing their bit in Qatar to chat up the dynamic young midfielder the Reds massively need, but finances will inevitably come into it. Which invariably makes the post-World Cup restart all about fighting for the top four while hoping the early pacesetters come back to us.

But even if there’s no Champions League football to offer next season I still believe Liverpool FC has a lure that no other club can match.

Chris McLoughlin is the co-author of I Feel Fine: The Klopp 100 – a new book about Jurgen Klopp’s seven years as Liverpool manager.

Available from the official LFC store, it is a colourful, vibrant gift book that is also packed with images and written by two lifelong Reds. One to give Santa a nudge on!