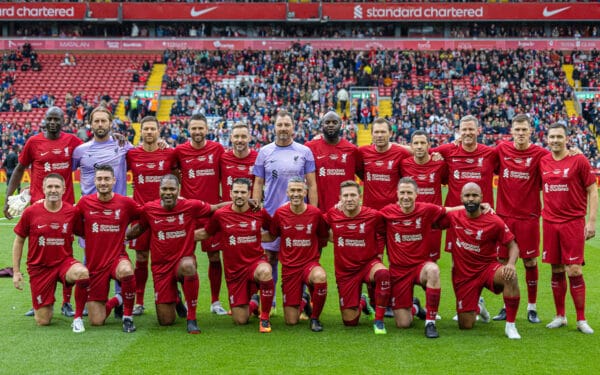 Liverpool Legends to play Celtic at Anfield in 2023

LFC Foundation have announced the next legends’ charity match, with some of Liverpool’s most famous ex-players to grace the Anfield turf once again in March.

Celtic are the team the Reds will be up against on this occasion, a match that will mark the first meeting between both clubs’ sets of legends.

The game is to take place on Saturday March 25, 2023, during the next international break, with kickoff set for 3pm (GMT).

The two teams are, of course, linked by a number of managers and players, as well as our iconic You’ll Never Walk Alone anthem.

Once again, 100 percent of the proceeds raised from the game will support a range of LFC Foundation’s and partner charities’ programmes.

The line-up of Liverpool Legends to be involved in this fixture is to be announced in the coming weeks and months. Celtic’s team will also be gradually revealed, with the likes of Danny McGrain, Roy Aiken, Alan Stubbs, Bobby Petta, Rudi Vata and Tommy Johnston all featuring in a legends charity match against Cleary Celtic earlier this year.

In the previous Legends’ matches earlier this year, Liverpool beat Man United over two matches that took place at Old Trafford and Anfield.

Mark Gonzalez and Florent Sinama-Pongolle were the two ex-Reds on the scoresheet in the home win, a game that also saw the likes of Xabi Alonso, Martin Skrtel, Jerzy Dudek and Maxi Rodriguez feature.

Last March, they also took on Barcelona Legends at Anfield, with Rangers, AC Milan, Bayern Munich and Real Madrid their other opponents in recent years.

The home game against United raised more than £500,000, with the previous six legends charity matches held at Anfield raising a total of £5 million for the LFC Foundation and its charity partners.

Celtic’s official charity, Celtic FC Foundation, which provides assistance to the most disadvantaged and vulnerable children and young people, will also receive a donation.

Tickets can be purchased online here.