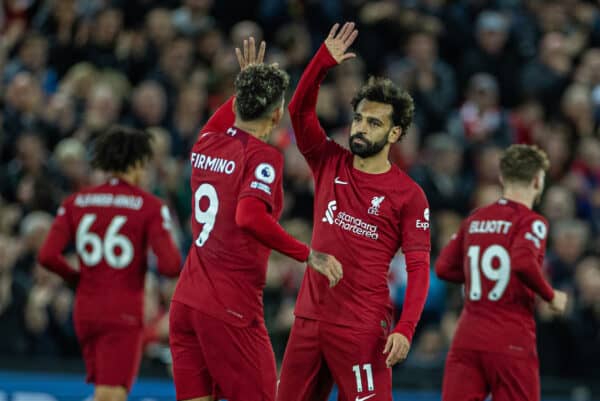 Liverpool are finally back in action, albeit in the friendly Dubai Super Cup, with Jurgen Klopp already tasked with plugging gaps in his lineup.

The Reds’ World Cup break has been largely productive, but the buildup to their meeting with Lyon in Dubai has taken a familiar turn.

A high-profile injury on the eve of Sunday’s clash, along with concerns emerging from training footage, make it more difficult to predict how Liverpool could line up.

Here are the options facing Klopp as he prepares for Lyon.

Though a 33-man squad flew out to Dubai for the mid-season training camp, they won’t all be available on Sunday:

Liverpool likely squad to take on Lyon will be comprised of 27 players:

Though the trip to Dubai is being treated as another pre-season, there is little need to ease players back in as would be the case during a summer warmup.

As such, it is likely that Klopp names his strongest possible lineup from the start:

That would see Liverpool take to the field like this:

However, there are no guarantees when it comes to fitness after a three-and-a-half-week break, with the absence of Matip and Thiago from training particular concerns.

If neither are fit to start, Klopp could turn to youngsters and fringe figures to fill the gaps:

Those tweaks would bring this Liverpool XI:

As the first friendly back following a long break, it would be wrong to read too much into Liverpool’s return clash, but it serves as an opportunity to get back up to speed.

Hopefully, that sees the majority of Klopp’s available key players start against Lyon, before handing chances to the likes of Ben Doak and Bobby Clark from the bench.