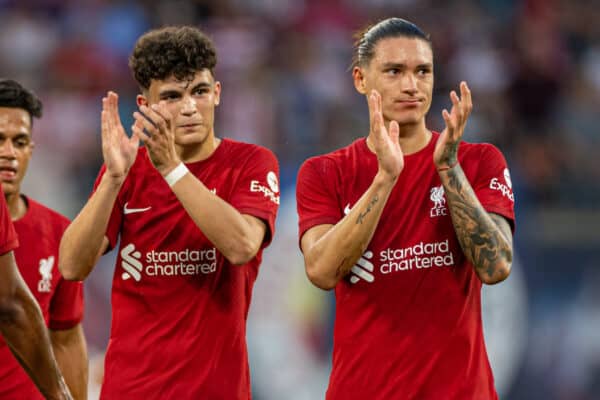 Jurgen Klopp faces a big decision over his Liverpool lineup for the first game back at Man City, with balance to be found in the Carabao Cup fourth round.

After five-and-a-half weeks away, including a training camp in Dubai and friendlies against Lyon and AC Milan, the Reds are back in competitive action.

A gift to the broadcasters, it just so happens to be against Man City in the fourth round of the Carabao Cup.

The biggest possible fixture from the teams remaining, it stands it be another must-watch meeting between English football’s two best sides, under the two best managers.

But predicting Liverpool’s lineup for their return from the World Cup break is a challenge.

Who’s in and who’s back?

Now, this is a tough one, as typically a Carabao Cup fourth-round tie would see Klopp keep his faith in youth and those with fewer opportunities.

But the timing of the game, as the first back after the World Cup break, and the calibre of the opposition, suggests a different approach may be taken.

In his pre-match press conference, Lijnders insisted that the door would remain open to the club’s youngsters, however, with a balance likely to be struck between youth and experience.

Here is perhaps the most realistic setup:

However, there is a chance that, with only four days to prepare for the Premier League‘s resumption at Aston Villa, Klopp looks to bring some of his World Cup players back into the fold.

With the majority of those now in training, it could be an even stronger Liverpool lineup at the Etihad:

Those alterations would see this XI:

Either way, Klopp is expected to give minutes to both returning World Cup players and promising youngsters on Thursday night, with Bobby Clark and Ben Doak also in line for appearances.

The focus, however, will be on securing victory over the Reds’ modern rivals, and a spot in the quarter-finals.