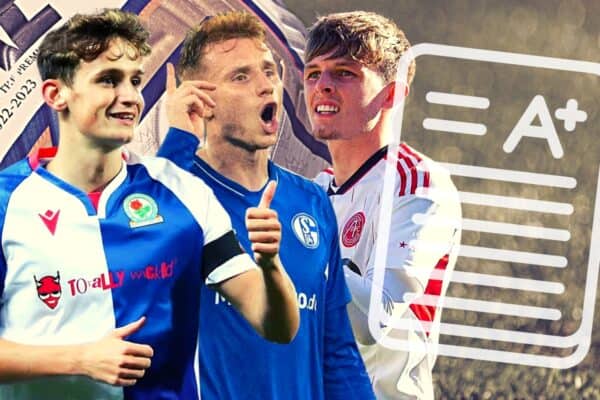 With Liverpool into their mid-season break and the January transfer window approaching, how have the 17 players spending the campaign on loan fared?

It was a busy summer for Liverpool’s director of loan management David Woodfine who, along with sporting director Julian Ward, was tasked with identifying temporary clubs for 17 players.

But how have they got on up to now?

Here, we take a brief look at each loanee and give them a grade for their season so far.

After a slow start, Morton has taken up a key role in Jon Dahl Tomasson’s midfield, adjusting to the physical demands of the Championship as he begins to dictate games.

Regular minutes in a side challenging for promotion will be invaluable for a player considered part of Liverpool’s long-term future.

A brilliant goal on his debut, hours after completing his move to Scotland, set the tone for Clarkson’s eye-catching spell with Aberdeen so far.

Operating in a more advanced role in midfield, the 21-year-old has shown his industry, creativity and eye for goal, capturing hearts in the Pittodrie stands.

The Dutchman made a promising start, but a serious ankle injury suffered at the start of October has ruled him out until 2023.

It has been a hit-and-miss stint at Blackpool so far for Williams, who enjoyed regular game time early on before losing his spot as a regular starter.

Concerns remain over his recovery pace, but a full season in the Championship – after an aborted spell at Swansea last time out – could be a defining one for the 21-year-old.

An outright success at Bolton, which has led to speculation over a move to the Championship mid-season.

Bradley has thrived as a right wing-back, bringing both goals and assists, and while the temptation may be to fast-track him up the tiers, it could risk upsetting his rhythm.

A summer switch to Famalicao in Portugal proved a waste of time for Beck, who then joined Bradley at Bolton and found himself catching up on his fitness.

The left-back’s first start in League One only came in November, so it is too soon to judge the success of this loan.

After 11 clean sheets in 23 games so far, conceding only 17 goals, Pitaluga is expected to return to Liverpool from non-league Macclesfield in January.

A new club, further up the pyramid, is then likely to be sought for the Brazilian goalkeeper, who is highly regarded within the first-team setup.

Though he has already been given exposure to senior football at Liverpool, Koumetio is still very much a work in progress, which has shown in a tough first loan move.

The Frenchman has dropped from first team to the reserves at Austria Wien, with the deal likely to be terminated in January.

A sleeper success in the early months of the season, Jaros has made the No. 1 spot his own at League Two side Stockport, though injury has disrupted his progress.

Thwarting James Maddison from the spot in a 3-1 shootout defeat to Leicester in the Carabao Cup was an early highlight, while five clean sheets have come in 11 league games.

Minutes on the pitch are the overriding positive for Lewis at Newport County, after a difficult spell with Livingston last season.

Typically deployed as a left wing-back, the 23-year-old has been a useful squad player in League Two.

Though groin surgery stalled his momentum, it has been an impressive first loan for the versatile Balagizi so far at Crawley.

The 19-year-old has been used as a No. 6, a No. 10 and on both wings, with a brace against Northampton, an assist against Rochdale and a star-making strike against Fulham coming before his injury.

Another cruel blow for Glatzel came in September, with a recurrence of a long-term hamstring injury – on his return to action – seeing him ruled out for an indefinite period.

It has just not worked out for Woltman at Doncaster, with a change of manager in October not helping his cause as he struggles to adjust to the rigours of League Two.

Given the platform of senior football in Wales, 20-year-old striker O’Rourke has taken the opportunity and excelled, with eight goals in his first 13 games including a stunning bicycle kick.

A late arrival at non-league Kidderminster, Bearne announced himself with a goal against Darlington in November, and the hope is he can now settle and kick on.

Now 22 and with his sixth loan club, Colombian defender Arroyo is not yet a regular starter in the Spanish second tier.

Returning his native Poland, 19-year-old goalkeeper Ojrzynski has taken up a backup role, with his next step unclear at this stage.