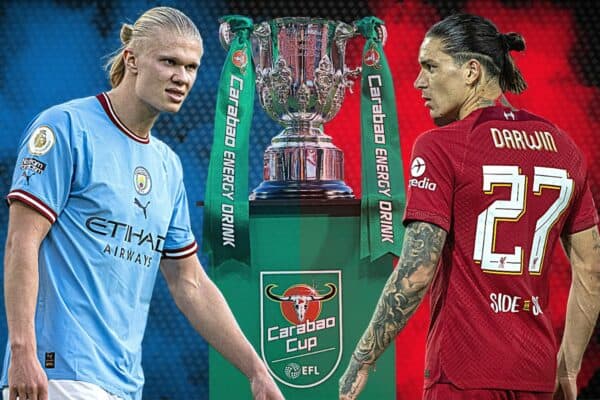 Liverpool finally return to competitive action with a Carabao Cup trip to Man City on Thursday, but how strong will both sides line up at the Etihad Stadium?

It’s been over a month since the Reds won 3-1 at home to Southampton in the Premier League, with the World Cup drawing the domestic season to a halt.

Jurgen Klopp‘s men are back this week, vying for place in the Carabao Cup quarter-finals, but facing as tough an assignment as possible.

Ahead of the game, we got in touch with City fan and writer Simon Curtis (@bifana_bifana) to get the lowdown on various topics leading up to kickoff, from fan relations to the importance of the competition.

Firstly, how much of the World Cup did you watch?

Against my better judgement, I got well and truly dragged in.

Having said an internal “no” to Qatar, winter World Cups and Infantino’s posturing, the football began to win me over by approxaimately the third game.

Did you miss City while they were away? Or nice to have a breather?

Again, I surprised myself.

I didn’t miss the incessant noise of the Premier League, the never-ending banter accounts on Twitter and know-it-alls frothing and dribbling about a truth that doesn’t exist.

It was a nice break from all the yellow noise.

Has anything changed at City in the last month or so?

Not that I’m aware of, apart from having a World Cup winner in the house, who everyone now knows as one of the summer’s most amazing bargains.

What’s your take on the recent reports about fan relations between Liverpool and City?

It’s getting a bit desperate, but the rivalry that some Liverpool fans deny exists is in fact taking natural shape, purely on the grounds that we are looking at the country’s two best teams.

When the best two meet, it usually means fireworks, excellent football and a lot at stake, so I understand it.

Who else is there? Man United have gone up in a cloud of black smoke, Chelsea‘s massive boom and bust policy makes them contenders one year and a joke the next, and Arsenal and Spurs are wannabes that have never managed to quite attain the level of Liverpool and Man City.

Childish fan reaction to each other is part and parcel of the sides going head to head for the game’s trophies.

In one sense it’s slighty embarrassing, but on the other hand, it adds some welcome spice to the games.

There should be friction. Each one is blocking the other’s potential success.

Looking ahead to Thursday, how strong do you think both teams will line up?

I think they will be semi-strong.

World Cup returnees in varying degrees of mental and physical collapse will need a little time, while those who exited early or didn’t play at all will be fine for the month off.

How much do you care about the Carabao Cup this season?

City fans have a strong affection for the League Cup. Decades of trophyless drifting means there is still a hunger for silverware and the League Cup counts.

The youngsters might turn their noses up, but “legacy fans” are still well up for it.

I can remember City’s three League Cup finals from the 1970s – well, two of the three, actually – in ’70, ’74 and ’76, and the run of final wins was broken last year, meaning many are keen to return to where we left off.

The club’s relationship with this trophy is lengthy and profound, as Liverpool found to their cost in 2016.

Where do you think both sides will finish in the Premier League?

Finally, what’s your prediction for Thursday?

That leaves room for a similar one-goal margin of error and a 3-2, which would still see us go through!