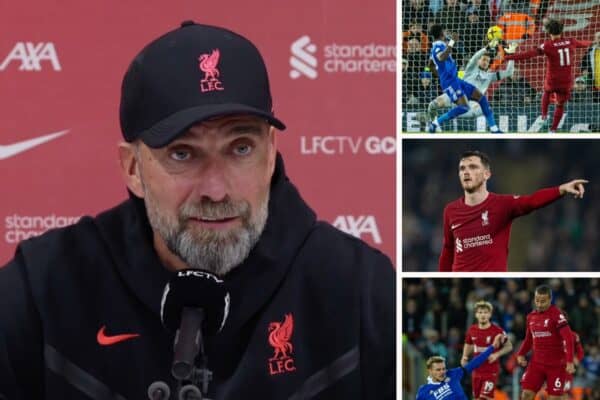 Jurgen Klopp knows “the majority” of his players “were not on the top of their game” in the win against Leicester, and he also had a word on Andy Robertson.

Here are three key points from the manager after Friday’s win:

Far from their best

Virgil van Dijk was quick to comment on Liverpool’s poor performance despite the win and Klopp was not far behind in echoing his words.

“The result is very pleasing but we all saw the game, it was not our best performance,” he said.

“We played in Leicester‘s hands and for a long time, we couldn’t get a foot in the game…the majority [of my players] were not on the top of their game.

“This can happen but I’m getting closer to 1000 games and I’ve seen these games, unfortunately, pretty often, so that can happen.”

Thankfully the lessons can be dished out with three points in tow but with Brentford full of confidence, they need to be learnt quickly.

Robbo’s issue from the warm-up

Robertson was withdrawn just after the hour mark and hobbled off the pitch, Harvey Elliott following soon after with a blow to the ankle.

There was a bit of irony to it all with the teenager having caused the left-back’s issue pre-match, Klopp revealed.

“Funnily enough, Harvey before the game [Elliott] injured Robbo a little bit. In our warm-up game, he hit him with a knee in the hip,” Klopp explained.

“It’s a dead leg, could play but then one point the muscle closed and couldn’t play on.

“Harvey got a knock, which is quite painful, but that’s it.”

There are less than three days until the match at Brentford, here’s hoping they are both available for selection.

Trent Alexander-Arnold was named Sky Sports’ Man of the Match after a performance which saw him thwart the threat of Harvey Barnes.

“Really good, very helpful and important in these moments, I think everyone knows how good Harvey Barnes is and Trent did exceptionally well,” Klopp said of his right-back.

Klopp’s long stood in opposition to any unfair criticism for Trent’s defending but he did not have to on Friday after a strong showing.

He was withdrawn late on and with time limited between games, the manager added on his squad: “We have just two days and we don’t know who can go again, Brentford is in a good situation.”