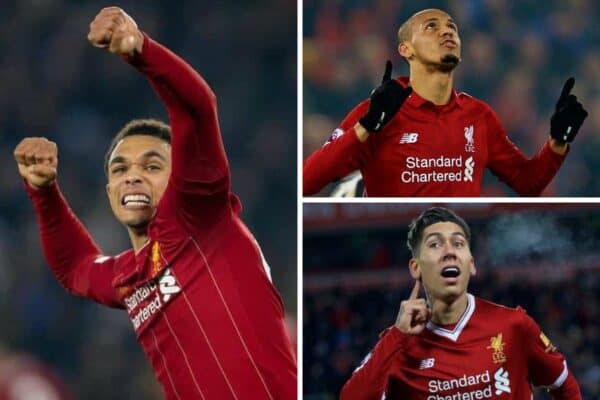 The 5-game Boxing Day run Liverpool will look to extend vs. Aston Villa

As Liverpool prepare to take on Aston Villa on Boxing Day, a look back at their five most recent matches on December 26 makes for encouraging reading!

The Reds haven’t actually played a Boxing Day match since 2019, with the Premier League fixture schedule seeing them play on the 27th in 2020 and the 28th last year.

This year’s Boxing Day encounter marks Liverpool’s first league match since November 12, with the season coming to a halt for the World Cup in Qatar.

A clash with Unai Emery’s Aston Villa certainly isn’t the easiest first league game back, with the Spaniard helping his new side to some impressive results before the break.

However, recent history would suggest Liverpool are usually in good shape the day after Christmas, with five wins, 15 goals scored and none conceded in their last five Boxing Day matches.

Liverpool’s best Boxing Day victory of all time? Because of what came after, it certainly might be.

When the Reds rocked up at the King Power Stadium on December 26, 2019, nobody quite knew what to expect.

Yes, Jurgen Klopp‘s side were leading the way in the Premier League, but they hadn’t actually played a league match since December 14.

In fact, just five days earlier, they were celebrating winning the Club World Cup after a 1-0 extra-time win against Flamengo in Doha, Qatar.

But if Liverpool were tired, they certainly didn’t show it on this day, completely annihilating a good Brendan Rodgers Leicester team.

Roberto Firmino put them in control in the first half, before James Milner‘s penalty, a second for Firmino and an excellent strike from Trent Alexander-Arnold put the icing on the cake.

It was a day the Reds proved their title credentials and they would, of course, go on to win their first-ever Premier League later that season.

A year earlier, Liverpool hit another four goals on Boxing Day, this time past Newcastle United at Anfield.

And just like in 2019, at this point of the season, Liverpool were top of the league, with this win taking them six points clear.

Dejan Lovren opened the scoring at Anfield in this game, with Mohamed Salah doubling the Reds’ lead from the spot, before Xherdan Shaqiri added a third, and Fabinho headed in Salah’s corner for his first-ever Liverpool goal.

They were unable to complete the job in the Premier League in 2018-19, but did win the Champions League five months later.

A year earlier, Liverpool went one better in terms of goals, with a 5-0 Boxing Day victory over a managerless Swansea City team who were bottom of the league.

Philippe Coutinho opened the scoring with a sublime curled effort, and would of course leave for Barcelona one month later.

Firmino scored twice in the second half, before Alexander-Arnold netted his first-ever Premier League goal for the Reds, and Alex Oxlade-Chamberlain made it five with less than 10 minutes remaining.

It was a win that moved about Tottenham into the top four, and would eventually finish in that position when the season came to a close the following May.

There was no Boxing Day game in 2016, but the year before that, Klopp’s men picked up all three points at home to a Leicester City side who went on to win the title later that season.

At that point, nobody really expected the Foxes to keep their unlikely title challenge going, but they ended up clinching the most extraordinary of triumphs. This was one of just three league defeats for them in 2015/16.

Christian Benteke’s second-half strike was enough to down Claudio Ranieri’s outfit, but he also had time to somehow miss in comical fashion in the dying seconds, with Kasper Schmeichel stranded at the other end of the pitch.

Liverpool’s impressive run of Boxing Day results began in 2014, when a Raheem Sterling goal was enough to secure all three points away at Burnley.

In what was a miserable season for the Reds, this win marked their first in four league matches, and only saw them rise to ninth in the table, a shadow of the team that were top the previous Christmas.

The goal came when Sterling latched onto Coutinho’s lofted pass, before rounding Tom Heaton to score.

Liverpool went on to finish sixth that season, with Rodgers only last two months of the next season before being replaced by Klopp.