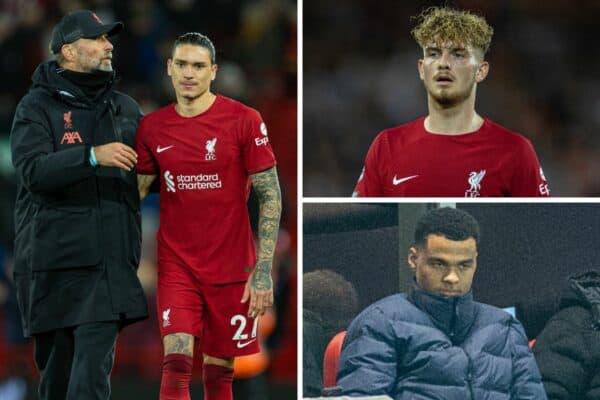 The good, bad and optimism or pessimism for 2023? – Liverpool 2-1 Leicester

There was a mix of good and bad to take from Liverpool’s 2-1 win over Leicester, their final match of the year, but what lies ahead in 2023?

The Reds battled their way to an ugly victory against the Foxes at Anfield on Friday night, with two own goals from Wout Faes.

Overall, it was a largely flat performance from Jurgen Klopp‘s side, who did at least recover from conceding early, but weren’t at their best at either end of the pitch.

Here, This Is Anfield’s Henry Jackson (@HenryJackson87) is joined by Dave Hendrick (@MrTwoFooted) and Red (@TaintlessRed) to discuss Liverpool’s win and to look ahead to the New Year.

DAVE: There’s not much good, to be honest, but I thought three of the starters put forward good performances.

Trent Alexander-Arnold started slowly but grew into it and went on to have a good game. It’s good to see him confident again and showing what he’s capable of.

His defending was the best part of his game and he kept the dangerous Harvey Barnes pretty quiet throughout. In their one-on-one battles, he stood up really well and got the better of him.

This is really promising because if you look back to his showings before the World Cup, that part of his game was awful.

His body positioning was all wrong, he wasn’t moving his feet and he was getting easily beaten, but this was so much better. In his stance, on his toes and forcing Barnes to make decisions. Really encouraging.

Darwin Nunez was a great outlet and his pace is incredible. He created two good chances for Mo and gave Timothy Castagne, Daniel Amartey and Faes nightmares.

He looked really comfortable with his touch and hold up play and those technical aspects have improved drastically since his early showings in August. The goals will come, he just needs to keep doing what he’s been doing.

Thiago was excellent defensively and ran the game as best he could despite the lack of help in midfield. He’s a really special player and we just need him to stay fit.

RED: Three points, and a crucial and rather lucky win.

Like Dave says, Thiago was excellent in a midfield, which otherwise was wholly subpar and too easy to cut through.

Nunez is constantly a handful and I’m still convinced if Klopp can improve just a few parts of his game he’ll be a world beater.

Not a lot to praise in what was a disjointed performance, but I’m grateful to Liverpool fan Faes for his two goals!

HENRY: I totally agree with both regarding Thiago – he is a mesmerising footballer and was playing a different sport from some of his teammates.

Without him, I dread to think how Liverpool would have fared, and while he lost the ball a few times, there was so much to love in and out of possession.

There is no doubt in my mind that Darwin will fire at some point and those currently mocking him will be made to look very foolish.

Oh, and four league wins in a row is pretty good! The Reds are coming, albeit unconvincingly…

DAVE: Andy Robertson and Alex Oxlade-Chamberlain were poor. Harvey Elliott continued to show that, in my opinion, he’s not a midfielder and not ready to play for a team with the ambitions we have. Mo Salah was below-par by his standards, too.

Jordan Henderson was very poor. He was at fault for the goal, he gave the ball away endlessly, he got dog-walked by Kieran Dewsbury-Hall and I thought he should have been hauled off after 25 minutes.

RED: Henderson had one of his worst recent performances for Liverpool and seemed to be a step behind everything, be in the wrong places at the wrong times and lose most duels.

Elliott is still young and clearly has talent when the ball is at his feet, but the spaces he likes to gravitate to tend to leave big gaps elsewhere.

Furthermore, he doesn’t have the physicality to compete in duels yet or the tactical awareness to help the right side enough off the ball in tough matches.

Robertson, who played well against Aston Villa, had a game to forget, too.

The team didn’t look balanced and Leicester were unlucky not to get something from the game.

HENRY: Again, I agree with the lads about Henderson – I thought he was all over the place and put in his worst display of the season.

Elliott also offered nowhere near enough off the ball, which has been a problem in many games, although he’s 19 so I’m not going to go overboard.

Once again, this constant issue of giving up chances was a big issue and it is something that simply has to be cut out, or we won’t get top four.

Brentford could win easily if we play like that against them on Monday.

Leicester‘s vile fans deserve a mention, too – did they sing a single song about their own team, or just aim horrible chants at the home supporters? I hope their trip home was miserable!

DAVE: We have world-class players from back to front, but unless we address the midfield and get a player who isn’t a liability to go with Thiago and Fabinho, and ideally another midfielder for depth, we’re winning nothing this season and top four might even be a stretch.

It shouldn’t be the case but that’s where we are right now. We’ve failed terribly when it’s come to regenerating our midfield.

We’ve allowed good players to leave for nothing, we’ve kept players well past the point of them being useful and we’ve kept others that should have been sold because they aren’t reliable enough when it comes to injuries.

Cody Gakpo will help in attack and it’s really good to have him in the door – I’m looking forward to seeing him play for us.

Unless the midfield is addressed immediately, though, we’re throwing this season away.

RED: Hopefully Gakpo injects something new into the side. Even if he takes a while to reach his full potential, he’s surely already more effective as a left winger than Alex Oxlade-Chamberlain, Fabio Carvalho or Elliott are at present.

I’m with Dave that every game we play seems to showcase the side is desperately in need of midfield reinforcements immediately and unless we do buy another midfielder in January, getting top four will be a push.

My confidence rests in that we do have the best goalkeeper in the league, a strong group of defensive players, even more so that Ibrahima Konate is now back fit, and dangerous forwards which will be even stronger when Diogo Jota and Luis Diaz return.

If more of these players perform closer to their best level than they did first half of the season, then we have a chance. Whether this will be enough to get past Real Madrid in the Champions League, only time will tell.

HENRY: I feel a mix of positivity and apprehension, if I’m honest.

I’ve never trusted anyone in Liverpool’s history more than Klopp, so I do believe the Reds will go up a gear in the coming months, especially with Gakpo in and hopefully a midfielder, too.

That being said, there is still the lingering feeling that some of these players have a little too many miles in their legs after the relentlessness of last season.

My gut feeling says Liverpool will get top four, but I don’t see a Champions League win happening unless there are huge improvements in the overall system and the individuals in it.

That’s not to say that great days won’t still come under Klopp, but plenty of squad surgery is required for that to happen, in January and in the summer.