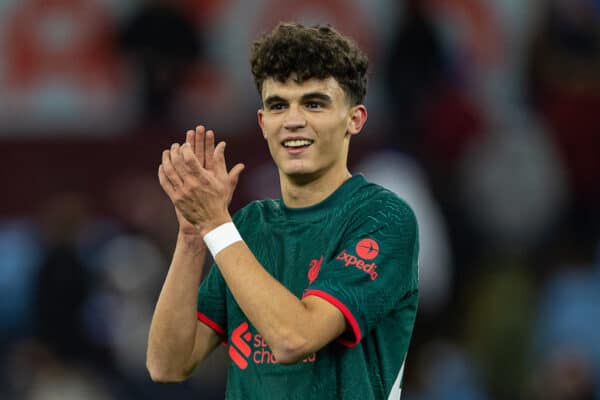 Why Dubai camp was “big” for growth of “fantastic” Stefan Bajcetic

Stefan Bajcetic has started to make a name for himself this season and a goal at Aston Villa only amplified that, but it is the training camp in Dubai that proved significant for the youngster.

Eighteen-year-old Bajcetic has played 190 minutes for Liverpool this season and has impressed with his composure and ability to absorb pressure at the base of midfield.

He’s become a fixture in senior training and has not been short of praise from coaches and his teammates, Andy Robertson and Fabinho added their names to that list on Monday.

Interestingly, though, Robertson noted the training camp in Dubai during the World Cup break proved significant for Bajcetic, who took on more responsibility and had to tidy up one part of his game.

“Stefan has been brilliant since he’s come in,” Robertson told LFCTV after the win at Villa.

“Dubai was big for him, trying to take a wee bit more on. We had a lot of young players there and he’s been in and around it more, he’s young but he had some responsibilities.

“He’s quickly grown up, quickly learning. A couple of things we had to speak to him about, timekeeping isn’t his best thing but he’s adapting to it.

“On the pitch, he’s a fantastic player. He’s got a huge future ahead of him, lots of potential.

“He was unbelievable [at Villa], when he came on he broke up the play and that’s probably what he’s known for, not quite his goalscoring!

“But it was a massive goal for us, so happy for him.”

There were 13 academy players who made the trip to Dubai and Bajcetic, obviously, took on an important role and made an impression, something Fabinho also noted.

“He’s a really good player, has a lot of personality. We have a lot of confidence in him,” Fabinho told Amazon Prime.

“I think I can talk a little bit about Stefan, he’s been training with us since the beginning of the season.

“He’s someone who always puts in the hard work in training and when he gets the opportunity to play he tries his best.

“He’s someone who really listens when we speak to them, or Pep and Vito [Matos] who are always with the young players.

“It was really nice, really calm [finish], when it came to him I thought ‘shoot, shoot’ but he took it round the goalkeeper and scored.”